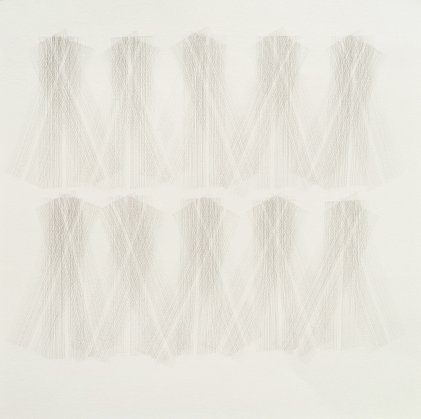 The series of works called ‘Chiaroscuro’ and ‘Mayo drawings’ were both made during a two month residency at The Custom House Studios and Gallery in Westport, Co. Mayo, in 2010. The word ‘Chiaroscuro’ means the treatment of light and shade and the drawings are a direct response to the play of light and shadow on the landscape in that part of County Mayo. Other works in the show include ‘Colourfield’ drawings which are also derived from the Mayo landscape and were made in 2011. A series of watercolours take as their inspiration the minutiae of nature – lichens, weeds and algae. All become subjects to study and observe and objects to derive images from.