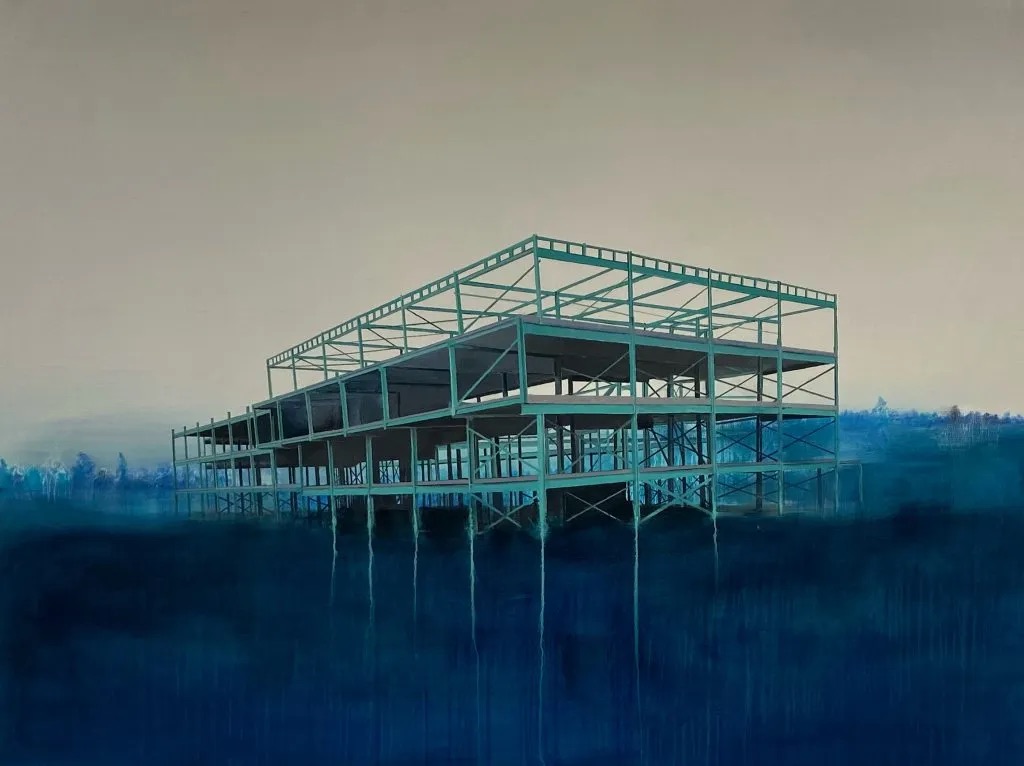 Pascal Ungerer showcases some exciting new work in a show that brings together many of Pascal’s interests, in pensive, foreboding and empty landscapes as well as abandoned industrial infrastructure, which he says is ‘emblematic of an architecture of the periphery because of its obsolescence, marginality and alterity.’

As an artist Pascal is interested in peoples connection to place and land and the wider perception of the natural or built environment and the interrelationship between these
two contrasting spaces.

His most recent painting work looks at liminal landscapes on the margins of human habitation, places that are temporal with a cyclical flux between abandonment and habitation.

Pascal says he is often drawn to unusual structures or topographies as well as places that have storied, hidden or layered histories. ‘For me, many of these places represent a kind of ‘otherness’ in a sometimes bleak and foreboding environment. Most of my paintings are fictional landscapes where I amalgamate different places and ideas into a metaphorical space to reflect upon wider socio-geographic issues, but my paintings are also intrinsically linked to the places and stories that have inspired them.’

Pascal Ungerer is a visual artist originally from West Cork. He holds an Honours Degree in Fine Fine Art from the Crawford College of Art in Design. In 2018 he completed a scholarship funded Masters on the prestigious MFA programme at Goldsmiths University London.

Though he has a background in lens based media Pascal has focused on developing a painting practice over recent years.

He has exhibited his work extensively throughout Europe – as well as in North America and Asia – including Blackburn Museum, CICA Museum South Korea, Roman Road Gallery London and the Visual Center for Contemporary Art, Ireland.

He has won and been shortlisted for many awards such as the Alliance Française de Cork Exhibition Award, the Bloomberg New Contemporaries, The Solo Award, The Alpine Fellowship, The Sunny Art Prize, The ACS Studio Prize and the Ashurst Emerging Artist Prize.

He has received funding awards and bursaries from the Arts Council of Ireland, Cork County Council, Cork City Council, Culture Ireland and Goldsmiths University London.  His work is held in numerous private collections in Ireland, the UK, the US, France, Germany and Switzerland.