Mick O’Dea: The Cut of Them 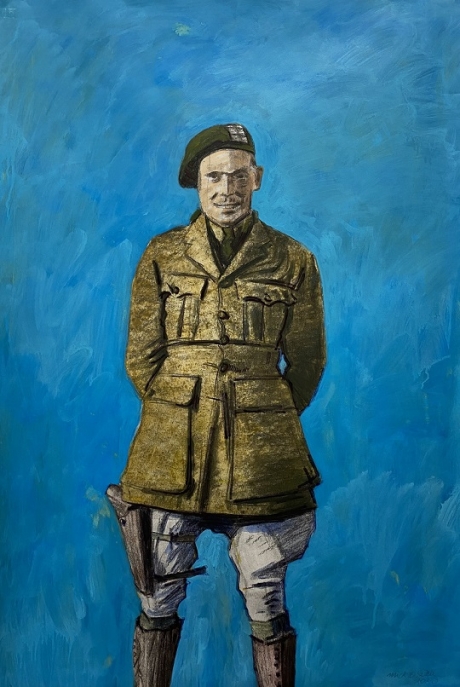 Clare-born Artist Mick O’Dea exhibits a selection of paintings on the War of Independence. The works, created from 2010 to the present, include some large-scale newly created pieces and some which haven’t been exhibited previously.

O’Dea’s work ‘forces us to look hard again at the shop-worn iconography of the War Of Independence. These are gunmen of various hues, living with and on the edge of violence, taut even when relaxed, and coiled to unleash or accept death in an instant. The Black and Tans and the Auxies carry themselves knowingly presenting a glamorous, swaggering or louche version of themselves. They court the camera and hold our gaze in O’Dea’s brilliant re-imaginings: the living men stare back at us from these large paintings, dominating us as once they thought to dominate a country. By contrast, O’Dea shows the men of the Mayo Flying Column as more wary and opaque, shielding their inner sensibilities.

“O’Dea working from historic photographs revivifies the figures from this period in all their flawed and slightly sinister humanity.”
— Professor Kevin Whelan

Mick O’ Dea studied at the National College of Art and Design Dublin, The University of Massachusetts Amherst, Winchester School of Art in Barcelona where he was awarded a Masters in European Fine Art. He lectured at NCAD for sixteen years up to 1999 and has acted as an external assessor and lecturer in Art Colleges and Universities in the USA, UK and Ireland. O’Dea has had numerous exhibitions and has participated in a wide range of artists residencies in Ireland, the USA and Europe. He was elected ARHA in 1993, RHA in 1996 and PRHA in 2014 and was elected to Aosdána in 1996. O’ Dea continues his practice as a full time artist since 1999 in Dublin, Mayo and wherever else his work may take him.

Image: Mick O’Dea: The Cut of Him, acrylic, 110 x 75 cm, 2020
Friday 6 March – Wednesday 22 July 2020
The Source Arts Centre
Thurles
Co Tipperary
Telephone: +353 504 90204
info@sourcearts.ie
www.thesourceartscentre.ie
Opening hours / start times:
The Gallery is open Tuesday to Friday 10am to 5pm, 2 to 5pm on Saturday and from 7pm when there is an evening performance.
Admission / price: Free
Associated sites
Design: iCulture • Privacy and cookies
Tweets by dnoting
other sites designed or
assisted by iCulture