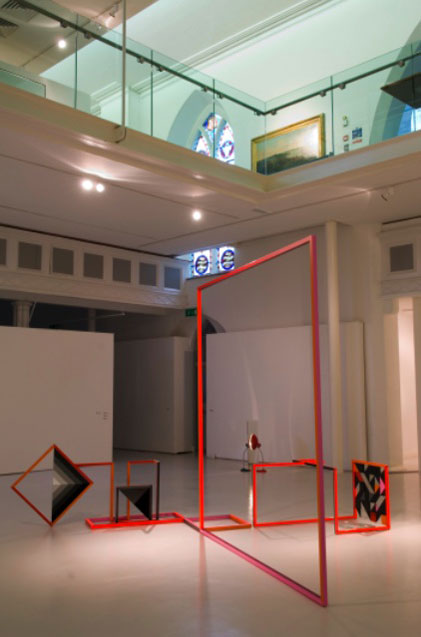 Highlanes Municipal Art Gallery opened its doors on October 4, 2006 and was the culmination of many years planning to deliver a dedicated visual art space for the Irish north east region, of an international standard in terms of design, management, environmental control and security.

The gallery is sited in the former Drogheda Franciscan Church and part of the Friary; known locally as the ‘High Lane Church’. The Franciscans gifted the property to the people of Drogheda when they ended their 760 year association with the town in 2000. The buildings date from the early 19th century, though elements date back to earlier times and include the former Franciscan burial crypts. The main exhibition spaces are open plan and include the old Church level and a new floor at the height of the old balcony and as such, the character of the building is not lost.

The Board of management raised over €4 million from international and local funding and donations. This was a major achievement for the town. As part of the development of the gallery the Board made a strategic decision to purchase much of the adjoining property a number of years ago, to enable it to plan for Highlanes Munipal Art Gallery’s long-term development. Much of this property has been incorporated in the development.

Highlanes Municipal Art Gallery programme over the first year saw it reintroduce the Drogheda Municipal Art Collection (DMAC) to the public for a three-month period. This was complemented with borrowed works from national and private collections, in order to place the late 19th century works in the Drogheda collection in their context, which has a strong representation from women artists. Other elements of the little known Drogheda Municipal Art Collection – which dates from the 17th Century, were shown from time to time. Highlanes Gallery programmes approimtely five temporary exhibitions every year, some of which are drawn from the Collection.

Highlanes Gallery has planning permission for Phase 2 – two further white cube galleries, an education centre and additional environmentally controlled storage areas, which it hopes to develop in the future.