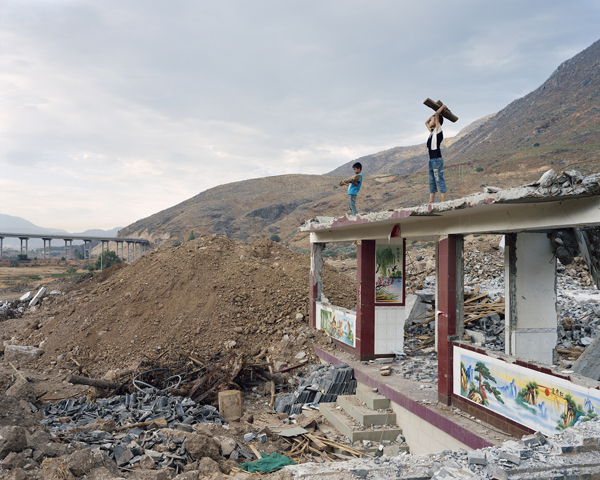 Artist’s Talk:  Yan Wang Preston will give a public talk about her work on Saturday 28th January at 12 noon. Admission is free, all welcome. Seats are allocated on first come basis.

Mother River is a breathtaking photographic odyssey by the British-Chinese photographer, Yan Wang Preston. It takes the viewer on a journey along the entire length of the Yangtze,  China’s ‘Mother River’. From the remote high Tibetan Plateau, through the Three Gorges and on to the river’s end at Shanghai, this stunning series of colour photographs captures the dramatic shifts in landscape and offers fresh perspectives on China’s present-day development.

The epic project follows a simple premise: to document the entire 6,211km length of the Yangtze river from source to delta. Yan Wang Preston used Google Earth to identify the coordinates of sixty-three locations marking every 100 km of the river’s course. It was these sixty-three ‘Y-points’ that she set out to reach and to photograph, come what may.

Over a period of four years, the artist made nine field trips into incredibly diverse and often remote terrain. Since the river source is 5,400 meters above sea level, and half of its length flows through some of the most majestic mountains on Earth, Mother River is a modern-day adventure, where the intrepid photographer faced a panoply of hazards including altitude sickness, mudslides, earthquakes, sandstorms, floods and wild dogs.

Wang Preston used a large-format field camera, the kind used by nineteenth century pioneering explorers. Although cumbersome and complex to use on location, the camera produces huge negatives, offering images with astonishing detail and resolution.

For Chinese-born Wang Preston, Mother River is in part an epic pilgrimage through her native country: an exhaustive exploration of a powerful symbol that reconnects her with the ancestral homeland. Closely associated with Chinese traditional paintings and an icon of the national landscape, the Yangtze represents the folklore of traditional China. However, with over 30 hydroelectric dams on its course, the river is synonymous with China’s rapid industrialization. Wang Preston’s epic, multi-layered work raises questions about the relationship between nature and culture, tradition and regeneration in one of the world’s most powerful economies.

Yan Wang Preston was born in Henan Province, China, in 1976. Originally trained as a doctor (she received a BA in Medicine from Fudan University Shanghai in 1999) she moved to the UK in 2005 and completed an MA in Photogaphy in 2009. Her work has been exhibited at Noorderlicht Photography Festival, the Netherlands (2012), the National Portrait Gallery, London (2006) and at the Syngenta Photography Awards, for which her work has been shortlisted. She won ‘Reviewers Choice’ at FORMAT International Photography Festival 2014, and was selected for the Britain-China Culture Exchange in 2015, with Mother River exhibited at Three Gorges Museum, Chongqing; Wuhan Art Museum; and The Swatch Art Peace Museum Hotel, Shanghai.