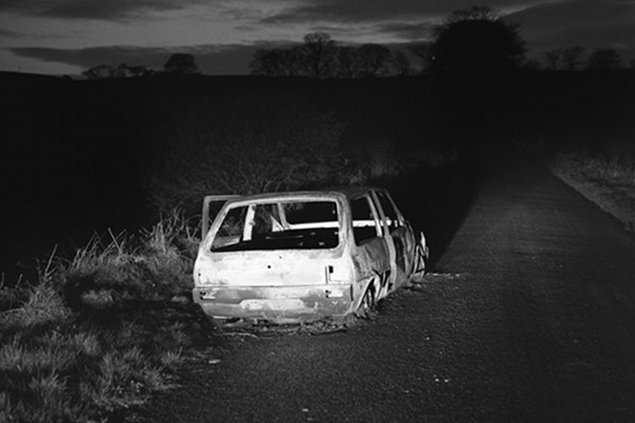 Kerlin Gallery is pleased to present LAPSE, an exhibition of new black and white photographs by Willie Doherty.

Photographs have a way of winnowing reality until another type of real is made. Likewise, the attrition of memory, in time, renders what remains reliably unreliable. Hindsight does not fully facilitate clarity – but rather the evolution of a fictive coherency, and the attendant loss of both vital and extraneous detail – the squeaking wheels, dripping taps and bloodied noses that insistently intrude upon the present.’ (Isabel Nolan, from accompanying publication)

Although Willie Doherty shot all the images from LAPSE between 1985 and 1993 this is the first occasion that he has chosen to exhibit them. During this period the artist was producing his seminal body of large-scale black and white photo/text works, which announced his arrival on the international stage. The photographs in LAPSE relate directly to the early black and white works era. However, Doherty has not attempted to embed text within these images, instead their titles acknowledge Doherty’s particular historical use of text.

Doherty is concerned with how these neglected and, to some extent, lost images oscillate between the present and the past. Unlike the rest of the artist’s oeuvre these works have not been initially exhibited at the same historical time as their making. As a consequence, they have been subjected to a different scrutiny, one that has been shaped by an understanding of how things have turned out, but one that cannot provide a full account of the forgotten traumas and injustices that have been shrouded in the fog of memory.

Born in Derry in 1959, Willie Doherty began exhibiting internationally in the early 1980’s. His practice has consistently addressed the representation of landscape, territoriality, history and the rhetoric of identity; showing such issues as contested and conflicted, exploring their relationship to memory and subjectivity. For more than 20 years Doherty’s career has played a crucial role in the development and importance of ‘the documentary turn’ in international contemporary art.

In 2011 Dublin City Gallery, The Hugh Lane presented a survey show ‘DISTURBANCE’ which premiered his acclaimed new video work ‘Ancient Ground’. The exhibition was accompanied by a new publication and is currently on show at the Towner Gallery, Eastbourne. Doherty will present a new work at dOCUMENTA (13), Kassel in June 2012. In 2013, his video work will be the subject of a survey exhibition at the Museo de Arte of the Universidad Nacional de Colombia in Bogotá.

LAPSE will be accompanied with a publication and a text by Isabel Nolan.