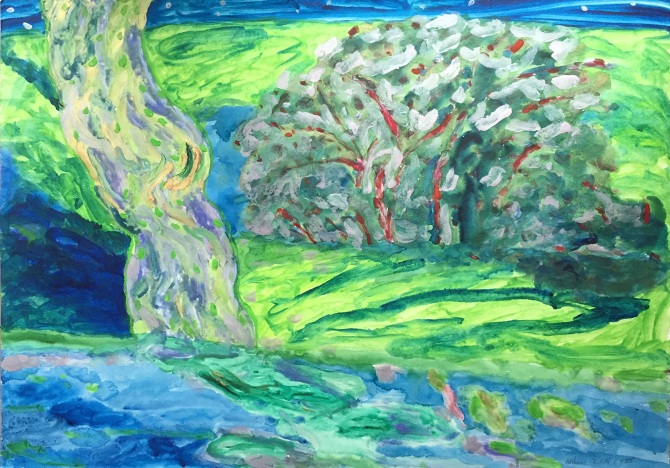 Upon establishing a studio near Roaring Water Bay, Cork in 1983 the Irish landscape became a prominent theme in William Crozier’s work. In Landscapes, views of West Cork islands, inlets, fields and woods are accompanied by paintings of his garden and the fertile farmland surrounding his home in the Hampshire countryside.

The vibrant contrasting colours and startling energy of his work lies in direct opposition to the traditional romanticised idyll of a muted, green Northern European landscape. Instead Crozier described it with acid yellows, glowering pinks and electric blues, exuberantly disregarding traditional perspective to produce bold compositions that vibrate with a taut, barely-contained energy. This contrast in his work, influenced by the colouration of the European Expressionists and the individualist theories of post-war Existentialism, is the defining characteristic of his unique and enduring artistic voice.

Born in Scotland in 1930, William Crozier studied at Glasgow School of Art from 1949 to 1953 before moving from Paris to Dublin and finally settling in London. From the early 1980s until his death in 2011 he spent part of each year living and working in Ireland. Elected to Aosdána in 1992, he was also an Honorary member of the Royal Hibernian Academy and exhibited widely throughout Ireland, the UK and Europe. His paintings are held in numerous private, public and national collections.

Landscapes coincides with The Edge of the Landscape, a major two-part retrospective of Crozier’s work taking place at Uillinn: West Cork Arts Centre and the Irish Museum of Modern Art, Dublin in 2017-18.