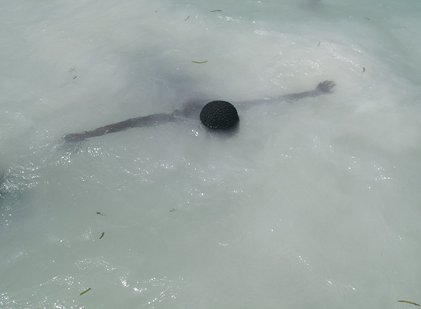 As part of the city-wide photographic event THERE, THERE curated by Stag & Deer, Parasomnia by Viviane Sassen will be exhibited in the Sculpture Gallery.

The series’ title Parasomnia alludes to sleep disorders and occurrences of anomalous and unusual actions. The body of work engages with our perception of the world and weaves elements of fine art, fashion and documentary generating something new: bold and perplexing, colourful yet serious, lucid and enigmatic. The visual constructions on show are a result of the collaboration of the nature of the subjects and Sassen’s presence as a photographer.

They are playful and skilful manipulations of the physical body to symbolise moments of ambiguity and disorientation. Her images exude a vibrant dreamlike force, which is immediate yet leaves open a space to interpret happenings and occurrences. Within the images resides a latent force of sculptural stasis, the power of the body and the world it is held in. In Sassen’s Parasomnia, as with dreams, we are left in a place of uncertainty with an insistence on our own imaginative response.

Viviane Sassen is a photographer based in Amsterdam. Part of her early childhood was spent in Kenya with a later move back to the Netherlands. The works in Parasomnia were taken in various parts of East Africa from 2008 – 2011 and represent an alternative vision to what we are familiar with from the African continent. They are mergings and abstractions of Sassen’s past life in Africa and her now working practice, allowing for a searching of imagination, thoughts and presumptions. Sassen won the Dutch Prix De Rome in 2007 and an Infinity Award from the International Center of Photography in 2011.

THERE THERE is a photographic event and exhibition bringing more than 30 international, national and local lens based artists, curated by Stag & Deer and is kindly supported by Cork City Council.

There There Digital Brochure (pdf 4mb)