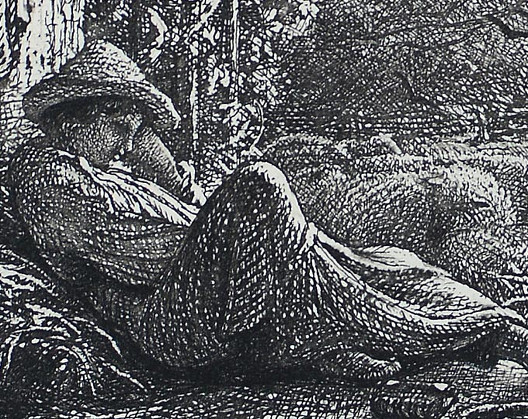 The Crawford Art Gallery is delighted to present an exhibition of the complete etchings of Samuel Palmer (1805-1881), one of the key figures of English Romanticism, alongside works which inspired the artist including Durer, Turner, John Ruskin, Seymour Haden and Francis Danby.

An image of mysterious wisdom won by toil.1

William Butler Yeats both admired and was attuned to Samuel Palmer’s etchings, in particular “The Lonely Tower”. It is easy to see why the poet mistook this quiet and compelling composition for an engraving. Samuel Palmer turned to the techniques of etching from mid-career and this medium not only lent a new creative impulse to his work and became Samuel Palmer’s favourite branch of art.

His thirteen etchings, with additional proofs and the four compositions completed after his death by his son A.H Palmer are on display on these walls, together for the first time.

Each etching is not the result of rapid or direct drawing from nature, but the accumulation of long and painstaking effort, experiment and recollected emotions. To both, father and son, the charm of etching was in “the glimmering through of the paper even in the shadows so that almost everything either sparkles or suggests sparkle”.

Etching seems to me to stand alone among the complete Arts.

The great peculiarity of etching seems to be that its difficulties; an

elegant mixture of the manual, chemical and calculative, so that its very mishaps and blunders (usually remediable) are a constant amusement,

it raises and keeps alive a speculative curiosity, it has something

of the excitement of gambling without its guilt and its ruin. 2

Curated by Anne Boddaert and Edward Twohig, from the Twohig collection.

Inaugural tour of the exhibition by Edward Twohig.

Lecture: Visible Poetry: The Etchings of Samuel Palmer – part of the Friends of the Crawford Art Gallery lecture series.

2 Samuel Palmer in a letter to Philip Gilbert Hamerton from Life & Letters, p.336-7