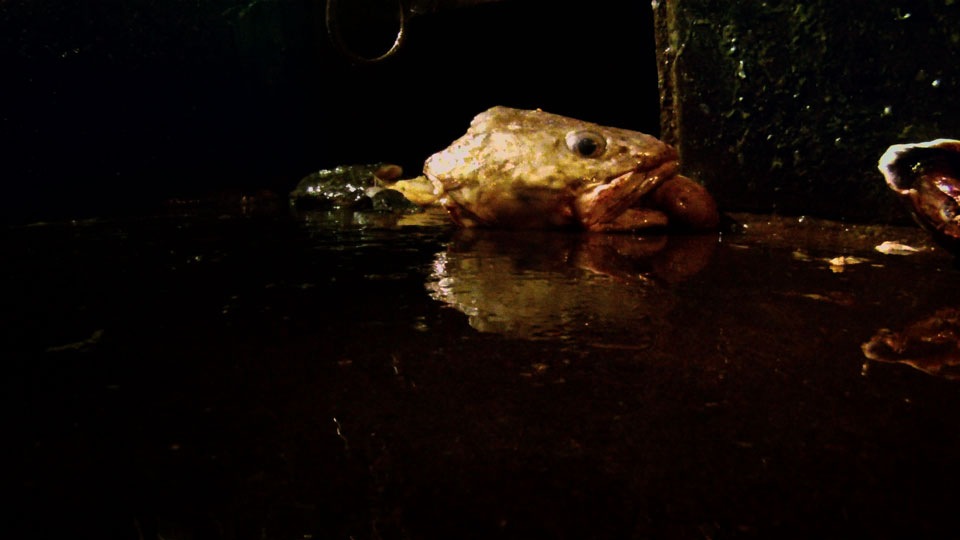 Crawford Art Gallery is delighted to present the film Leviathan (2012)by Verena Paravel and Lucien Castaing- Taylor as part of its ongoing screening series by Irish and International artists.

Verena Paravel and Lucien Castaing – Taylor’s Leviathan is not a sea monster but a monstrously visceral depiction of the beauty and brutality of life at sea. Shot on a commercial shipping vessel the film drags the viewer – above and below the sea – into the raw momentum of nature, man and machine at odds with one another. Fish and fishing crew wrestle amongst the elements for their respective lives, whilst shrilling sea gulls plunge vertically into the sea to collate the spoils of excess fishing.

Filmed off the coast of New Bedford, a former whaling port and inspiration for Herman Melville’s Moby Dick, the New England town still earns its living from the sea. Paravel and Castaing-Taylor push the boundaries of documentary making. Keeping the same punishing shifts as the crew – working 20 out of 24 hours – and used numerous portable GoPro cameras -strapped to the heads of the crew and themselves to film the plunging seas, swooping chains and winches. The film negates any ideas of romance within the commercial fishing industry depicting stomach curdling sea conditions – deep water fishing has the highest fatalities in any industry the United States. In Ireland, 134 maritime deaths have been recorded since 2002, 38% fatalities from the fishing sector alone.  Alongside these figures, in September 2014, the International Organisation for Migrants quoted over 44,000 migrants have died at sea since 2000, 22,000 have perished seeking a better life in Europe.

Paravel and Castaing-Taylor film Leviathan is an uncompromising immersion into a potentially vanishing way of life – a theme through much of their work.  Collaborating as anthropologists, artists, and filmmakers in the Sensory Ethnography Laboratory, at Harvard University, the film frequently uses extreme close ups to clarify the harsh conditions of the of the fishing crewmen, and to that of the fish amidst the ever shifting, visceral and unnerving perspective of the surrounding environment. Verena Paravel and Lucian Castaing-Taylor  will give a public talk at the preview of Leviathan at 6pm, Thursday 16 April.

Véréna Paravel and Lucien Castaing-Taylor are anthropologists and artists who work at the Sensory Ethnography Lab at Harvard University (http://sel.fas.harvard.edu). Most of Castaing-Taylor and Paravel’s collaborations are in film, video, and installation. Their works include Canst Thou Draw Out Leviathan with a Hook (2012—), a four-part project about humanity and the sea. Their film Leviathan was released in 2013, and won the FIPRESCI (International Film Critics) Award of Locarno International Film Festival, the Michael Powell Award of the Edinburgh Film Festival, Their work is in the permanent collection of the Museum of Modern Art, New York, and the British Museum, has been exhibited at the Tate Gallery, London’s Institute of Contemporary Arts, the Centre Pompidou, the Berlin Kunsthalle, the National Gallery of Art (USA), MoMA, PS1, and the Whitechapel Gallery, and has screened at the Berlin, Locarno, New York, Toronto, and other film festivals.