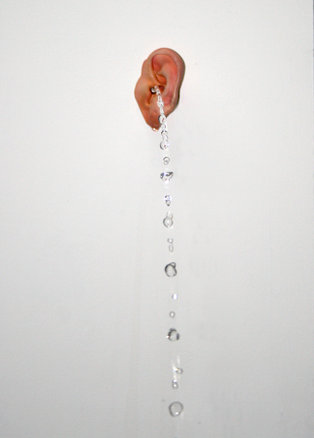 The Butler Gallery is delighted to present an exhibition by German born, Dublin based artist, Vera Klute.

The exhibition ‘Blindgänger’ showcases a body of work produced by Klute over the past two years that uses a wide range of media. From video installation to indoor fountain and kinetic sculptures, to figurative oil painting and drawing, these works are fundamentally characterised by a playfulness that highlights the experimental nature of the artist’s practice. While each piece works autonomously, cumulatively, the pieces relate to each other and operate as a cohesive whole.

Vera Klute’s practice is fed through observations from her immediate, everyday environment. She examines patterns of behaviour as well as social and psychological mechanisms to understand the often ironic and absurd nature of daily living. The work explores the human habitat from the viewpoint of a natural scientist attempting to classify and categorise – to find pattern in chaos. Thematically this subject is approached from two perspectives: on the one hand, her work deals with personal anxieties and social interaction with the outside world; on the other, anatomical explorations and pseudo-scientific apparatus are used to suggest new explanations of the familiar. Vera Klute travels inside the body, in a similar way to the 1966 science fiction movie Fantastic Voyage, directed by Richard Fleischer, where scientists board a submarine that has been miniaturised and injected into the blood stream. Akin to Fleischer’s approach, Klute’s animated investigations of the body’s interior reveal surreal images of the workings of the system, like a clinical travelogue around the body.

Vera Klute’s current body of work takes on new stylistic shapes. By referring to classical styles such as Dutch still life or ecclesiastical Renaissance drawing, the work picks up on the recurring themes of human culture such as memento mori or the existence of the divine. While this work is not repeating these questions or trying to answer them, it plays on the pointlessness of this ongoing search for answers. By juxtaposing the mundane with the divine, the work deals with this recurring subject matter from a detached viewpoint where all possibilities are open.

Klute is an artist extremely skilful at working in the many media she uses to communicate her very unique perspective on the mysteries of how the body works. Her inventive kinetic sculptures vary from legs in motion, to a water-spouting ear, to the gurgling insides of a truncated torso, to a pair of moving disembodied hands that brings to mind ‘Thing’, from the 1960’s TV series The Addams Family. ‘Thing’ is able to run on his fingertips, much like a spider. This is an image that also finds its way into a fabulously inventive eight-screened video installation by Klute featured in the show.

Vera Klute has a vivid imagination that is mischievously dispatched with humour and great skill. This exhibition engages us on many levels, and has broad appeal. It is guaranteed to amuse, engage, and remain in the mind long after you have left the gallery.

Vera Klute was born in 1981 in Salzkotten in Germany and lives and works in Dublin. In 2006 she received an Honours BA in Fine Art from Dun Laoghaire Institute of Art, Design and Technology. Awards include: Emerging Visual Artist Award, Wexford Arts Centre (2009), Arts Council Bursary Award (2008, 2009 and 2011), Emerging Artist Award, The Gallery, Newry (2007). Klute has been included in many group shows worldwide. Her solo shows include the Wexford Arts Centre (2009) and The Lab, Dublin (2006). Her work will next be seen in the Futures exhibition in the RHA, Dublin in 2011.

With thanks to the Arts Council for essential annual funding and to the OPW, FÁS, The Heritage Council and Kilkenny Local Authorities for additional assistance.

Blindgänger literally means ‘someone walking blind’ but the actual meaning is ‘a firework or explosive that has been lit but doesn’t go off’. Memento Mori translates as ‘remember your mortality’.