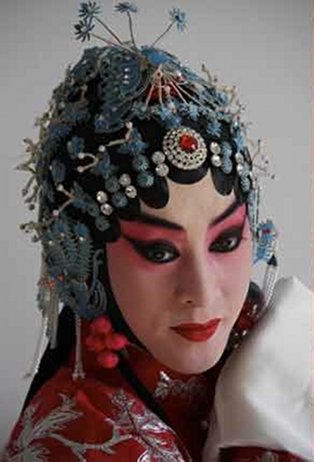 To celebrate Chinese New Year 2012, the Gallery of Photography is presenting the Irish premiere of The Opera, Varvara Shavrova’s spellbinding work on traditional Peking Opera.

The Opera is an artist’s insight into the fragile world of the Peking Opera, one of the most revered artforms of the Chinese national scene.

The work focuses on the transformation from male to female, and from female to male, of the Peking Opera artists. Balancing moments of pure visuality with behind the scenes footage, the video underscores the striking avantgardist qualities of this most traditional of artforms.

The Opera is accompanied by a specially commissioned score by composer Benoit Granier which incorporates elements of traditional Chinese and contemporary electronic music.

The Opera is complemented by related works in other media, including limited-edition photographic prints and two time-lapse projection works. Also included are selected pieces from Windows on the Hutong, a series of photographic lightboxes with sound, which offer a fascinating glimpse into the street-life of Beijing’s traditional alleys.

The launch event takes place on Friday January 20th at 6.00pm, when The Opera will also be projected outdoors on the big screen at Meeting House Square. The exhibition marks the keynote visual arts event of the Dublin Chinese New Year Festival.

An exciting programme of Family Events will take place in the Gallery during the Festival.

Saturday January 21st – The Opera Make Up workshop, in association with Design for Stage & Screen Make-Up students of IADT. Transform yourself into a Peking Opera character – and record your transformation in a short time-lapse photo sequence to take home with you!

About the artist: Born in Moscow, Shavrova studied fine art at the Moscow Poligraphic Institute. After 15 years in London, she moved to Beijing, where she lived and worked for over five years. Now based in Dublin, Shavrova has recently been commissioned by Espacio Cultural del Tanque, Tenerife and will be exhibiting in the Museum of the History of St Petersburg in Spring 2012. Her work is in many important public and private collections. She is represented by Patrick Heide Contemporary Art, London.