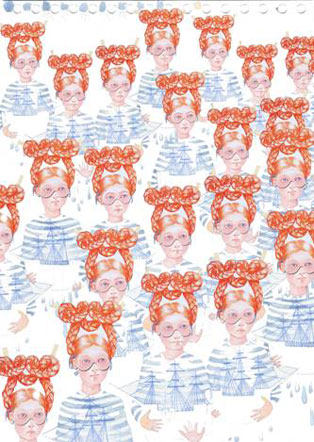 Kevin Kavanagh is delighted to invite you to the conversation between Vanessa Donoso López and Enrique Juncosa, Director of the Irish Museum of Modern Art, Dublin, before the opening of Grande, feliz e invencible on Thursday 30th of June at 5pm.

The Spanish Armada is, for us Spaniards, “La gran y felicísima Armada,” which ironically translates to “the great and very happy armada”. This “super happy Armada” was a fleet of about 130 ships that sailed form Lisbon in August 1588 with the purpose of escorting an army from Flanders to invade England. It met with armed resistance in the English Channel and was scattered into the North Sea.

Following its defeat, the Armada attempted to return home through the North Atlantic, when it was driven from its course by violent storms and toward the west coast of Ireland. Most of the survivors of the multiple wrecks were put to death, and the remainder fled across the sea to Scotland. It is estimated that 5,000 members of the fleet perished in Ireland.

In 1596, an envoy of King Philip II of Spain arrived in Ireland to make inquiries of survivors and was successful in only eight cases. I bet there were way more. This nearly 500 years old historical fact had too many things in common with me, like the way a bunch of Spaniards end up in Ireland by accident after trying to conquer England, like I did…

This exhibition wants to be a wink to those ones that suffer such an adventure and particularly to the ones who, finally, stayed on Irish land.

Vanessa Donoso López was born in 1978 in Barcelona (Spain). She studied Fine Arts at the University of Barcelona and Winchester School of Art in Winchester (UK). Previous solo exhibitions include Where there is Hair, there is Happiness, Blue Wall Gallery, Cavan, Techno-color-moving-science, M’atuvu art space, Josworld, Brussels (Belgium) in 2010; Mysteries of contemporary inspiration and other wonders, Stone Gallery, Dublin in 2008, Establishing a Mission, Ashford Gallery, Royal Hibernian Academy, Dublin in 2007; The blessed virgin of helpless artists, Stone Gallery, Dublin in 2006; Prints, plants, water and colours, Foreseters, Winchester (England) in 2004; From Iberia to Scandinavia, Ariman, Lund (Sweden); and Iron Frames, La Cereria, Barcelona (Spain) in 2002.