Upending – an exhibition of enquiries 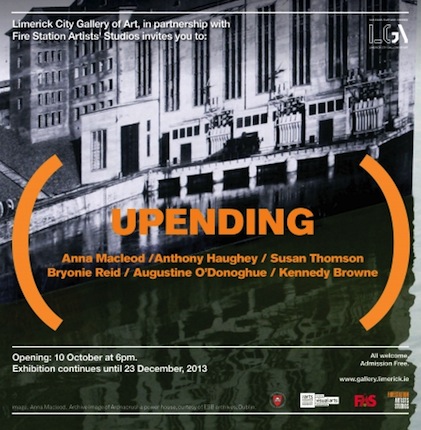 This think tank commissioned by Fire Station Artists’ Studios and conceptualised and led by the Danish curatorial collective Kuratorisk Aktion, provided a critical, aesthetic and discursive platform for socially engaged arts practitioners. Participants were invited to collectively reflect on their artistic and curatorial practices with the aim of developing new methodologies and dialogues.

After two years, the artists were commissioned by Fire Station Artists’ Studios upon the invitation of Helen Carey, Director / Curator of Limerick City Gallery of Art, who also participated in the Troubling Ireland think tank, to present new work in LCGA. These new works trouble Ireland from a wide variety of perspectives, addressing themes of sustainable energy, labour and loss in recessionary times, real and tourist approaches to Ireland, border identities, homophobia and its colonial legacy, and the landscape, both mental and physical, around the Pharmaceutical industry in Ireland.

Further information on Troubling Ireland can be found here.

To coincide with the Upending exhibition, Fire Station Artists’ Studios in partnership with LCGA is hosting a one day symposium on Tuesday 12th November in LCGA. This symposium involves national and international speakers who will reflect on Art and Responsibility as well as some of the enquiries emerging from Upending, such as the impact of the post colonial on cultural identity, and the influences on the emergence of the 21st century industrial and labour landscapes of Ireland among others. Speakers include Galit Eilat (Former Director of The Israeli Centre for Digital Art in Holon, and currently guest curator in Van Abbemuseum , Holland), Tone Olaf Nielsen and Frederikke Hansen from the Danish curatorial Collective Kuratorisk Aktion, Liz Burns (Fire Station Artists’ Studios), Helen Carey (LCGA) as well as a roundtable discussion with the artists involved in Upending exhibition.

For further information on this symposium and to book a place, go to www.gallery.limerick.ie or email artadmin[at]firestation.ie

As Fire Station celebrates its 20th birthday in 2013, and to mark Fire Station’s ongoing work in the area of socially-engaged arts practice over the last 20 years, a new publication by Fire Station titled Art and Activism will be launched in 2014. This publication will include a newly commissioned essay by Israeli curator Galit Eilat who explores the theme of art and activism in times of social and political upheaval, an interview with Danish curatorial collective Kuratorisk Aktion, and essays by Bryonie Reid and Liz Burns. In addition it contains work by all the artists who participated in the Troubling Ireland think tank: Kennedy Browne, Anthony Haughey, Anna Macleod, Augustine O Donoghue, Helen Carey, Susan Thomson and Bryonie Reid

This publication will be available for purchase in Fire Station Artists Studios in 2014.