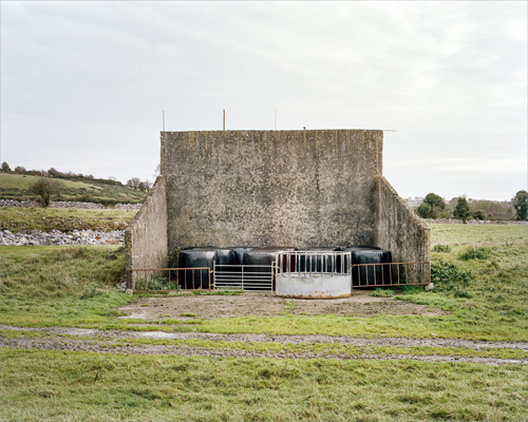 This exhibition brings together work by the Belfast School of Art 2014 MFA Photography Graduates. Each of the 15 photographers represents a diverse point of view, which collectively succeed in reimagining contemporaneity and the way we live now. Reflecting on social and economic landscapes, these images reveal singular and communal identities, the parameters of which are unbounded, drawn and redrawn as they are, by both time and history.

Photography has long been associated with the gathering of evidence, classification and identification. The camera’s inherent ability to carry out these roles, to archive without bias, has thrown into question the role of the photographer. The photographer as a living being is inherently subjective and the combination of these two mediums has made the photograph and its history one of the most complex of mediums.

Thus, how we traverse our physical form, so as to unfix identities, is addressed by Alison McDonnell through the creation of a safe space for transgender people. Where McDonnell looks to the body, Jill Quigley seeks to remake our domestic vernacular buildings and through such personal interventions, manages to challenge the stereotypes that exist within any kind of ruin. The ruin re-emerges in the work of Johnny Savage, albeit a modern ruin, whose presence brings us face to face with the landscape of our past and our future. Using the moving image Bes Young re-works the definition of identity, as tied to such an ability to remember a past, and questions, whether what is physically held within our corporeal form and gesture, answers more fully the question of who we are? Here the laws of the equine kingdom may suggest a key, whereby bodily markings function to identify the very existence of a horse. Christopher Barr, returning to the origins of photography, reimagines traditional systems of identification from within a travelling community whose history has traditionally resisted such boundaries.

The silhouette as a line of demarcation is used by Tim Durham to re-draw the collapse of the Irish Property boom. This tendency to map out spacial territories reminds us that there are no clear lines that define a beginning or an end. Rather, there are territories that exist as grid-like structures, which collapse onto themselves, generating non-linear narratives that are interdependent upon one another. Our ability to have “a coherent identity in a digital age” is one of the key concerns within the work of Peter Evers. Here “the virtual, the real and the representational, the photograph and the sculpture” fold into each other, just as our corporeal selves now permanently intertwine with our virtual selves. Where then do we locate ourselves within the world? Bernard McNicholl returns to a place of memory but his work reveals that you can never go back home and that a place photographed now, is photographed as something new.

Quite aptly, therefore, Kenneth O’Halloran’s Handball Alleys return us again to the site of ruin. Within this work we witness how time and the very process of making a photograph have stilled a once vibrant place. Where Bessie Young fixes the viewer through movement, O’Halloran moves the viewer to a place in Irish culture long since passed. This attempt to remember the rituals of the past so as to understand how to live in the present is captured by Daragh McDonagh’s portraits of Shamans. Within this work we encounter individuals who have returned to “older ways, pagan traditions and alternative practices” so as to connect to the natural world, at a time when being completely ‘connected’ can often result in an absolute sense of disconnectedness. In such a world even the food that we eat can seem alien, so far removed from its origin that it is unrecognisable as a natural, nourishing form. Des Moriarty explores the “grotesque beauty” inherent within food that allows us to exist as transient, mobile beings, surviving on food that has the potential to outlast us.

Jim McKeever expands upon this transitory feature of modern life. McKeever’s work returns us to a world where the virtual will not suffice and reveals how man exists on the road to self-realisation. Matthew Thompson intuitively picks up this question, of how to locate the self in a world “alienated through technology and fragmented social structures”. Here the questions are open-ended, recognising once again that time is a many-layered being and that no new thing exists unbounded by the old. What then of Oliver Smith’s subjects? “The empty, weary faces of the come down” are in fact the faces of youth trying to be present without burden of past or future. This is the dream of all photographs and perhaps it is photography’s only fixed identity.

Finally, in such a place as Simon Burch’s photographs the consequences of progress are laid bare. Burch leaves Ireland in search of his ghosts. Here America exists as a prospect, despite its disappointed forefathers, and the way in which we construct a view on the present is re-framed.

Within this exhibition, Ireland, a state that is perhaps both parent and child, has been presented as a prospect. These new image-makers have created their work during a time when Ireland’s viability as a state has been tested. It is this continual questioning of a place and its people, of a state of being, which makes a prospect continually viable.

About the University of Ulster MFA Photography Programme:

The MFA programme was established by Paul Seawright at the Belfast School of Art in 2010 and has quickly gained a reputation for turning out compelling work, elevating the status of Irish photography both at home and abroad. As the only MFA Photography course in Ireland, now with two Magnum photographers as tutors, it attracts students from all corners of the country and the world.