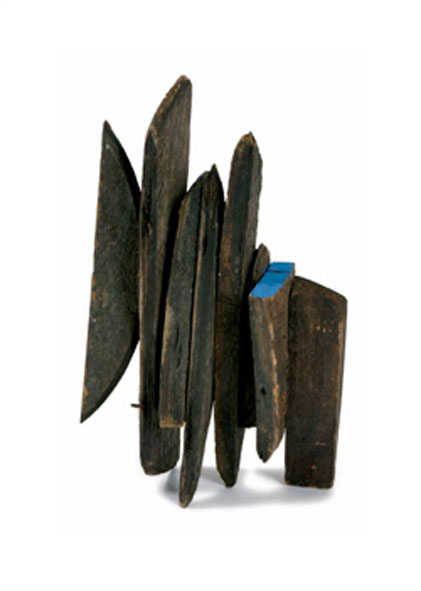 Tony O’Malley holds an important and distinguished position in the history of twentieth century Irish art. A highly respected and beloved artist, his works are represented in all major Irish museums and included in the most significant public and private collections of Irish art. Self-taught, his artistic career only began in 1960 when he was in his forties, but his everyday, workmanlike approach to his practice resulted in a prolific career. His practice was a quiet one, modest and non-careerist. While he found recognition among his peers during his thirty years – 1960 to 1990 – among the artistic community of St Ives, Cornwall, the serious attention he deserved only came to him later in life in Ireland, the country of his birth. He settled back in Physcianstown in Callan Co. Kilkenny in 1990, with his wife Jane, where he lived and worked until his death at the age of eighty-nine.

O’Malley’s constructions became a natural part of his working practice right from the beginning and were a constant presence, nestled and perched very comfortably in the studio, and reflecting an eclectic parallel to his life work. While they were mostly made indoors, occasionally elements for a work might be found and made elsewhere. Highbourne Cay, 1986, was made in the Bahamas and includes a ‘billy’ – an oar shaped club used by Bahamian fishermen to kill their prey. The circled red ‘T’ bestows new ownership to the piece, similar to a graffiti artist’s signature or ‘tag’. With the years, came found materials from many sources – off-cuts from the carpenter’s workshop opposite the studio in St Ives to findings on various beaches.

The simplicity and formal mastery of O’Malley’s constructions reflect the modernist tradition of assemblage that stretches back to Pablo Picasso and to Kurt Schwitters, an artist he admired. Some of his contemporaries in St Ives, like Ben Nicholson, Barbara Hepworth and Peter Lanyon were also drawn to the medium of collage and assemblage.

While it may be more accurate to describe these works as ‘assemblages’, O’Malley always referred to them as constructions, hence the title of this exhibition. These three-dimensional works of various shapes and sizes incorporate many components, primarily oil, nails, string and wood collage. There was no time to lose for an artist coming late to making work. O’Malley was consumed, either busy from eye to subject with pen or brush in hand, or absorbed in making these sculptural constructions from the materials gathered around him. He never destroyed anything, each piece catching a moment of life’s journey and forming its own link in the chain.

Drawing was the necessary root of all of O’Malley’s work and concisely knotted the mediums together. The incised drawing line is found throughout the paintings and is very much at work in these constructions, which can be seen as three-dimensional drawings. All of the constructions come with their own hook or string attached. Made by the artist, they add to the essential self-containment of the pieces. O’Malley liked to work in many mediums and while his painting was undeniably at the forefront, he gave as much personally to everything he realized, with each fragment adding to a rich and full working life. Tony O’Malley has said, “…my home place and its landscape is still in my psyche. I call it inscape – inner revelations of the outer psyche”. O’Malley was a proud son of Kilkenny who later went on to receive the ‘Freeman of the City’ in 2000. His association is a positive one for Kilkenny, whose people appreciate the huge contribution he made to the arts in Ireland.

These extraordinary sculptural works can be seen as extensions of what O’Malley achieved on canvas and on paper. They reveal another dimension to his range of abilities as an artist of extraordinary ingenuity. The beauty and diversity of these constructions is a real surprise, and encourages the viewer to look anew at one of Ireland’s most acclaimed artists.

With thanks to the Arts Council for essential annual funding and to the OPW, FÁS, The Heritage Council and Kilkenny Local Authorities for additional assistance. Many thanks are also extended to the private lenders to this exhibition and above all to Jane O’Malley for her enduring commitment to the legacy of her dear husband Tony O’Malley.