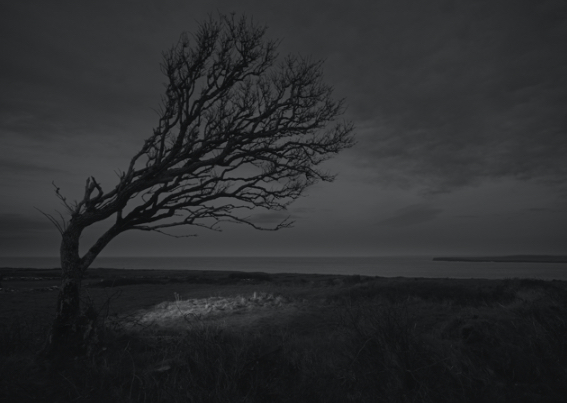 Cillín, an exhibition of new work by photographer Tommy Weir will open in the RHA Gallery this autumn and travel to The Dock in Carrick-on- Shannon and Uillinn, West Cork Arts Centre in Skibbereen.

From the 7th Century, through the Middle Ages and continuing to the late 20th Century, unbaptised children were rarely buried in consecrated ground. Denied access to the graveyard, they were buried in cillíní instead. These remote places were aligned with boundaries in the landscape, on the edges of townlands, at the bottom of cliffs, along the coastline of the sea or the edges of lakes. The locations are thresholds themselves, perched between two different spaces, and evoke a sense of looking back in time. Indeed, they are often sited within prehistoric sites, within ancient stone circles or by standing stones. These unofficial graveyards form a part of the Irish landscape, numbering several thousand across Ireland.

The babies were buried in the dark. The day the infant died, the father would take the body from the home and journey on their own to the cillín which could be some distance away. They would then bury the infant between nightfall and dawn. These are bleak places. The level of neglect, the erasure, all echo the exclusion from communal ritual. Such a hard place at the end of what must have been a dreadful day, it still was a site where a solitary man gave care to a newly dead infant, a ritual of a form in an ancient place.

Cillíní cover the Irish countryside. The documented sites are numerous in certain counties, for example Galway has 476, but Sligo lists merely 22. A good deal are undocumented and are only known locally. The locations vary, some being quite remote, deep in forests or high on hills, others situated within fields or just outside official graveyards. Weir’s body of work forms both the outcome of a period of research and an evolution of his prior work which focused on death, landscape and the making of art. Weir’s practice, partly performative, recreates the night time journeys these fathers made through the making of these images and opens up for discussion the cultural and social structures which have enabled this very particular Irish phenomenon.

“Nothing fully prepares you for the initial site visits, recce walks and shoots, and then the subsequent night time shoots over a period of days. Conditions must be right, nightfall, no rain, little wind, lighting, framing. These are a solitary experience and quite meditative and considered. I repeat them as needed, weather conditions and other factors having their impact.” Tommy Weir.

Weir has also collaborated with poet, Una Mannion and archaeologist, Marion Dowd on this body of work, bringing together photography, science and poetry, looking at the Irish relationship to death and ritual over the centuries.

Born in Dublin, Tommy Weir has had a career spanning the arts, from visual art through publishing, design, theatre, film and photography. After graduation from Trinity College, Dublin he worked as curator in the Douglas Hyde Gallery, prior to establishing a gallery space at the City Arts Centre, Dublin.

Weir lived and worked in New York where he curated an exhibition of young Irish artists, celebrating the launch of The Ireland House at NYU, prior to embarking on a career in design with Scholastic Publishing, The Brooklyn Academy of Music, Pentagram and with Michael Bierut and Paula Scher working in the areas of Broadway shows, theatres, museums and fashion. Returning to Ireland Weir moved into film, establishing Janey Pictures with his partner, filmmaker Marian Quinn. Their feature film 32A, won Best First Feature at the Galway Film Fleadh, the Tiernan McBride Screenwriting Award and was nominated for several IFTAs including Best Picture and went on to win the IFTA for Cinematography. Weir has produced several films with visual artists, notably Walker and Walker, including Nightfall which represented Ireland at the Venice Biennale, and Mount Analogue. He also produced Painting Patrick with Nick Miller and several films including Black Square with his sister, Grace Weir, exhibited in IMMA and London and Trinity College Dublin and lectures on film and photography in the Yeats Academy of Arts, Design and Architecture in IT Sligo.

He completed his MFA in Photography at the Belfast School of Art, graduating with multiple prizes, including the Royal Ulster Academy’s Outstanding Student and Ulster University’s Collection Award. He has exhibited his photographs in both Ireland and the UK and was featured in Beyond View, a ten year celebration of photography in the Belfast School of Art at Belfast Exposed.