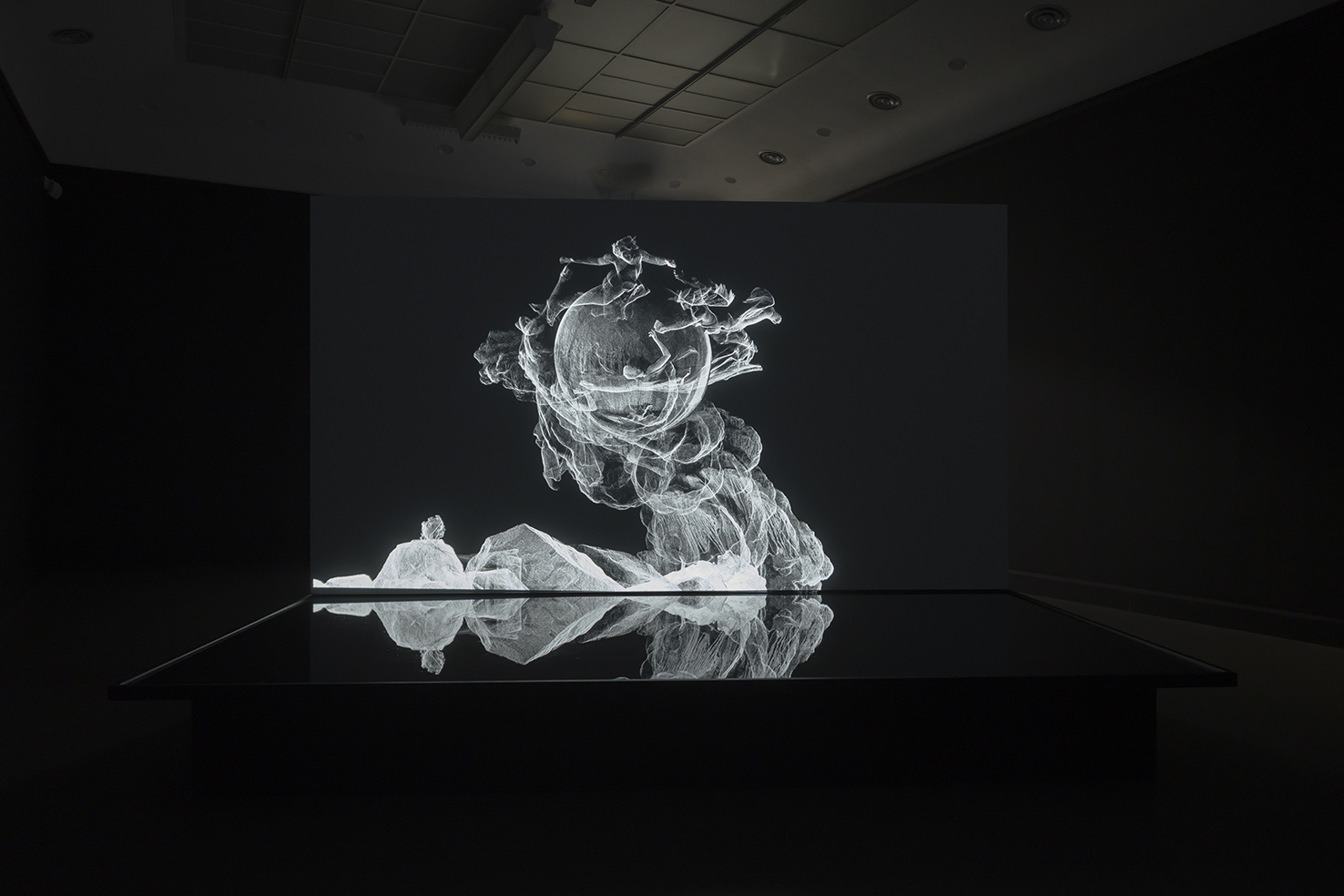 The Otolith Group: Xenogenesis, brings together a significant selection of works by The Otolith Group, the London-based artist collective founded in London in 2002 by Anjalika Sagar and Kodow Eshun.

Featuring a cross-section of key works produced by The Otolith Group between 2011 and 2018, the exhibition reflects the artists’ ongoing commitment to creating what they think of as ‘a science fiction of the present’ through images, voices, sonic images, sounds and performance working to create forms of life that announce a devotion to an aesthetics of discrepant abstraction, devotional cinematography, post-cinematic blackness and post-lens based platformalisms.

The Otolith Group’s pioneering artworks which include post-cinematic essayist films, videos and multiple screen installations address contemporary social and planetary issues, the disruptions of neo/ colonialism, the way in which humans have impacted the earth, and the influence of new technology on consciousness.

Xenogenesis is named after The Xenogenesis Trilogy, Octavia Butler’s title for her science fiction novels. Along with Octavia Butler, other key figures that form a compositional matrix for the travelling exhibition include the composer and musician Julius Eastman (1940–1990) and the polymath and educator Rabindranath Tagore (1861–1941).

The Otolith Group, and their longstanding curatorial platform The Otolith Collective, will enact the Department of Xenogenesis (DXG) at IMMA, a time space for convening public online and offline discussions, performance, screenings and exhibitions with artists, filmmakers, theorists and musicians. The DXG builds upon the exhibition and has developed throughout the tour.

The exhibition is accompanied by a major new publication,The Otolith Group: Xenogenesis, an extensive and comprehensive polyphonic exploration of the work of The Otolith Group. Edited by The Otolith Group with Megs Morley and designed by Luca Frei, Xenogenesis has been published by IMMA and Archive books, with the generous support of their international partners Buxton Contemporary, Haus der Kulturen der Welt (HKW), Institute of Contemporary Art, Virginia, Sharjah Art Foundation, Southern Alberta Art Gallery and the Van Abbemuseum.

The Otolith Group was founded by artists and theorists Anjalika Sagar and Kodwo Eshun in 2002. The anatomical entity of the otolith operates as a kind of figurative black box for withholding intention and calculating discrepancy. Articulating the idea of the Otolith with the idea of the Group alludes to the histories of collective practices invented by artists that theorise and theorists that practice art within and beyond the United Kingdom.

The post-cinematic practice of Eshun and Sagar is informed by an aesthetics of the essayistic that takes the form of a science fiction of the present in which moving images, sonic speculations, performances, publications and installations explore the intertemporal crises and interscalar catastrophes that construct the Racial Capitalocene.

The Otolith Group has been commissioned to develop and exhibit their works, research, installations and publications by a wide range of museums, public and private galleries, biennials and foundations worldwide.