The Magdalene Series: We are the Map 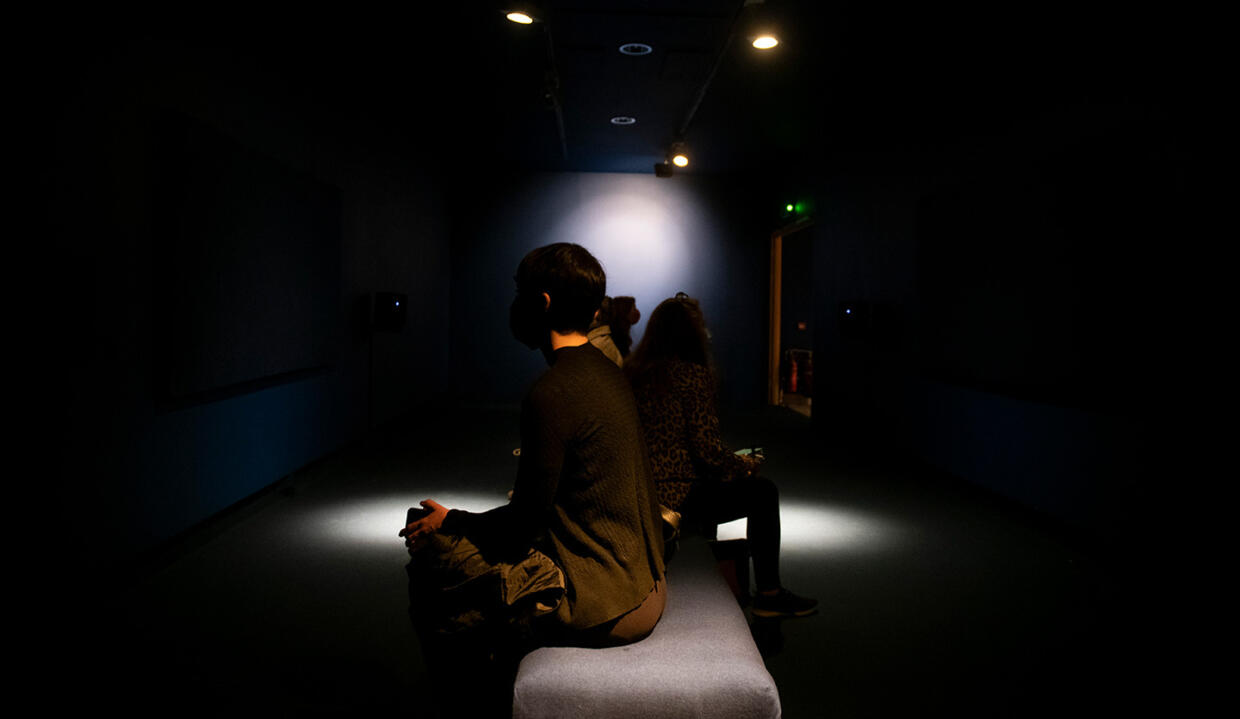 Text and sound installation by Sinéad Gleeson and Stephen Shannon

To the side of The Map, a whisper emanates from deep blue space (Gallery 2).

You do not need to know my name but:

We are the Map is an ekphrasis / intimate, immersive sound response located in Gallery Two, by writer Sinéad Gleeson and composer Stephen Shannon. Gleeson was originally paired with Maher and Fallon to write a text in response to the work in Gallery One for the catalogue publication –– but from this, a new collaboration developed. It became an integral audio piece, moving from Gleeson’s original text into an immersive soundscape that accompanies ‘The Map’.

Their incantatory sound quest is narrated by an ‘everywoman’ who moves around new terrain. The everywoman’s freedom of movement is in contrast to the many women who were unable to escape the laundries, mother & baby homes, or homes where they worked non-stop.

‘We are the Map’ is divided into 24 sections echoing the 24 books of the Odyssey. It’s a journey, a pilgrim’s progress, a quest through new lands and terrains.

Gleeson and Shannon collaborated on the sound and texture of the piece, adding music from Mary Barnecutt, Sadhbh Sullivan, and Matthew Nolan. It builds to a final chorus of 36 individual voices united in a mantra; their herstories filling areas of Mahers and Fallon’s Mappa Mundi. Voices such as Lynn Ruane, Catherine Corless, Vicky Phelan, Ailbhe Smith, Felicia Speaks, Rosaleen Mc Donagh, Olwyn Fouéré, Marian Keyes, local women from Tallaght, and the Magdalene artists themselves. They all carry their own stories that now inhabit ‘The Map’.

Sinéad Gleeson is a writer, whose essay collection Constellations won Non-Fiction Book of the Year at the Irish Book Awards and the Dalkey Literary Award for Emerging Writer. It was shortlisted for the Rathbones Folio Prize, the Michel Déon Prize, and the James Tait Black Memorial Prize, and has been translated into several languages. Her short stories have featured in Being Various: New Irish Short Stories (Faber) and Repeal the 8th. She has edited several award-winning anthologies including The Long Gaze Back: An Anthology of Irish Women Writers, The Glass Shore, and most recently The Art of the Glimpse. Sinéad has engaged in multi-disciplinary collaborations with artists and musicians, with commissions from City Gallery Wellington, The Wellcome Collection, BBC, and Frieze, and performances at Hugh Lane Gallery, The Dock Arts, and Los Gatos Festival. In 2018, ‘Panopticon’ was part of a group show ‘Ex-Voto’ at Galway Arts Centre. Forthcoming work includes a collaboration with artist Aideen Barry and This Woman’s Work: Essays on Music, co-edited with Kim Gordon (2022, White Rabbit Books). She is currently working on a novel.

Stephen Shannon is a composer and music producer based in Dublin, Ireland. He has previously recorded and released music as a member of Halfset, and currently as Strands and the duo Mount Alaska (251 Records). He works out of his own studio – Experimental Audio – where he has produced, recorded and mixed dozens of records for Irish and international artists. He regularly collaborates with writer Sinéad Gleeson on installations and audio essays for live performances at festivals, galleries, and national radio. Stephen also writes and composes for film, documentaries, and TV. Recent film work includes Kim Bartley’s feature documentary Pure Grit, which premiered (and won the Best Feature Documentary Award) at the 2021 Galway Film Fleadh; an adaptation of Daniel Woodrell’s Tomato Red, directed by Juanita Williams and Brian O’Malley’s gothic horror, The Lodgers. He has also composed scores for Andrea Mastrovito’s I Am Not Legend and original live scores for Night Of The Living Dead, Der Golem, Metropolis, and The Adventures of Prince Achmed, which have been performed at BAM in New York.

The Magdalene series will explore Mary Magdalene’s associations with the incarceration and institutionalisation of women and other themes such as forced labour, morality, shame, reparation and penitence.

The series will propose a new world, uncurbed by religious, political or societal doctrine, a world led by the experience of Magdalene and viewed through the lens of contemporary feminism and feminist theology.