The Magdalene Series: The Map 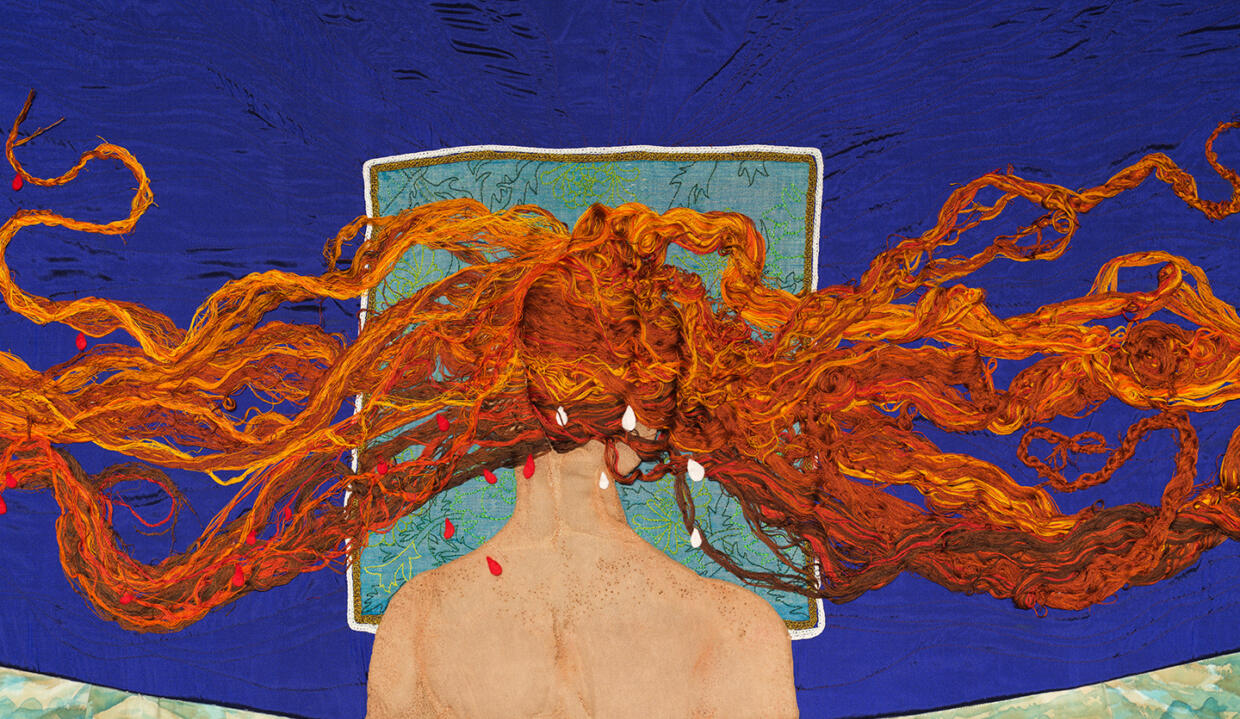 A collaboration by Alice Maher and Rachel Fallon

The Map, a collaborative work by artists Alice Maher and Rachel Fallon is the second exhibition in the Magdalene Series at Rua Red, curated by Maolíosa Boyle.

The series features the work of five of Ireland’s leading artists Amanda Coogan, Jesse Jones, Grace Dyas, Alice Maher, and Rachel Fallon. They were commissioned by Rua Red in 2018 to create work in response to the history and legacy of Mary Magdalene and her association with the incarceration and institutionalisation of women, and to propose a new world uncurbed by religion, political, or societal doctrine. It is a world viewed through the lens of contemporary feminism and feminist theology.

The Map is a monumental textile sculpture spanning the enormous space of Gallery One. With its own continents, winds, currents, and constellations, The Map draws the viewer in, inviting a reorientation. Its richly worked surface is an epic Mappa Mundi where the structures and languages of cartography are used to imagine and re-imagine the life, legacy, and mythology of Mary Magdalene and her impact on women’s lives. An alternative topographic and psychic landscape is uncovered in this witty, complex un-picking of the established narrative of Mary Magdalene.

“Maps are neither mirrors of nature nor neutral transmitters of universal truths. They contain silences as well as articulations, secrets as well as knowledge, lies as well as truth.” – ‘The Sovereign Map: Theoretical approaches to cartography throughout history’ by Jacob, Conley and Dahl.

The Map comprises highly detailed hand-embroidered, sewn, painted, appliqued, printed, found, and crocheted components. The intense two and a half years of labour over three lockdowns to create the map is a testament to the invisible labour of women everywhere.

Maher and Fallon utilise the iconography of Renaissance maps and medieval tapestries, as well as the language of Victorian ‘cartes de tendre’ and moral schemas such as ‘the Pilgrim’s Progress’, to subvert and challenge the very belief systems and power structures that these maps were established to uphold.

Alice Maher has produced some of the most iconic images in contemporary Irish art. Her work is embedded in the realms of nature and culture, subversion and transformation, mythology and memory. Her work encompasses drawing, sculpture, print, textiles, photography, installation, and film. Alongside her individual practice, Maher is known for her collaborations with other artists, dancers, composers, and writers such as Doireann Ní Ghríofa, Aideen Barry, Junk Ensemble, Trevor Knight, and the Artists’ Campaign to Repeal the Eighth Amendment. The Irish Museum of Modern Art presented a major retrospective of her 30-year practice in 2012. Her works can be seen in many international collections including Boston Fine Art Museum, The Hammer Museum, The British Museum, Centre Georges Pompidou, IMMA, Hugh Lane Municipal Gallery, the Crawford Gallery, the Ulster Museum, and the Arts Councils North and South. She was a founder member of the Artists’ Campaign to Repeal the Eighth Amendment.

Rachel Fallon is a visual artist who makes work around themes of protection and defence, looking at territorial wars in domestic and maternal spaces and addressing the topic of women’s relationships to society. Her work encompasses sculpture, drawing, photography, and performance and is firmly rooted in the processes of making.

As well as an individual practice, she regularly collaborates with Irish and international artists and collectives; including Artists‘ Campaign to Repeal the Eighth Amendment, Desperate Artwives, Grrrl Zine Fair, and The Tellurometer Project.

The two disparate ways of working fed into one another and are therefore equally important parts of her practice. She is a founding member of pff publications – a feminist zine. Her work is held in public and private collections including the Arts Council of Ireland Collection, the National Museum of Ireland, and Goldsmiths Womens‘ Art Library, U.K.

The Magdalene series will explore Mary Magdalene’s associations with the incarceration and institutionalisation of women and other themes such as forced labour, morality, shame, reparation and penitence.

The series will propose a new world, uncurbed by religious, political or societal doctrine, a world led by the experience of Magdalene and viewed through the lens of contemporary feminism and feminist theology.