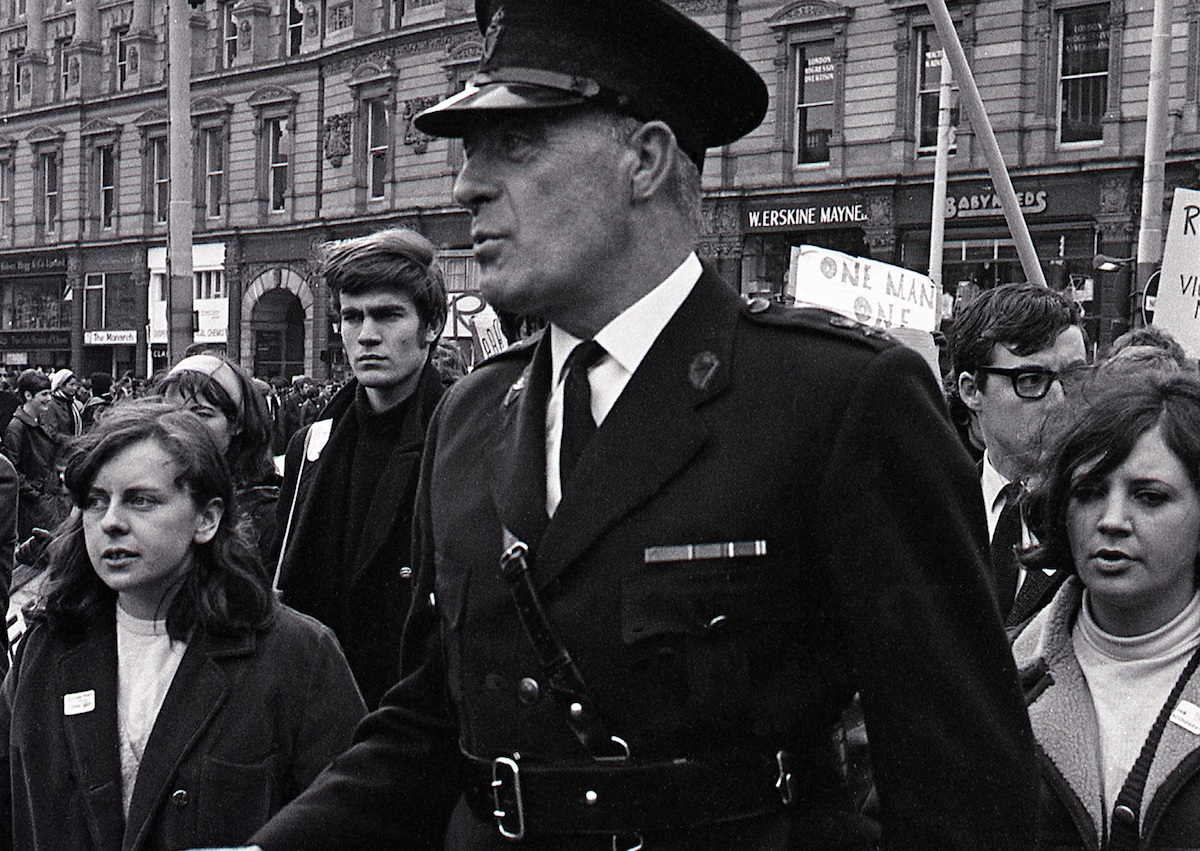 The Lost Moment exhibition looks anew at the Civil Rights movement in Northern Ireland fifty years on from the marches and peaceful protests that immediately preceded the Troubles.

Guest curated by Sean O’Hagan, who writes on photography, art and culture for The Guardianand The Observer, the show places the Northern Irish civil rights struggle in the context of the many international street protests that made 1968 such a tumultuous year.

From Paris to Prague, Chicago to London, mass protests reverberated across the world via the TV news. The year of discontent began in Northern Ireland when activists organised civil rights marches against discrimination in housing and jobs. Using the tactics of non-violent civil disobedience employed by Martin Luther King Jr. in the American south, the marches unleashed a wave of Unionist counter-demonstrations. The often brutal police tactics used against the marchers were caught on camera and broadcast around the world, igniting global media interest in the Northern Irish civil rights movement. Though its legacy remains contested to this day, the exhibition argues that this was the lost moment when the Troubles might have been averted.

The exhibition features dramatic images by Steve Schapiro of the famous Selma to Montgomery civil rights march in 1965, alongside work from three renowned Magnum photographers: David Hurn and Ian Berry.  The Northern Irish civil rights struggle, from the first march in August 1968 to the Battle of the Bogside in 1969, is captured though the work of Gilles Caron, Clive Limpkin, David Newell Smith, Buzz Logan, Barney McMonagle, Eamon Melaugh, Larry Dickinson and Tony McGrath. The exhibition also includes projections, video installations, contemporary political posters and a wealth of other ephemera from the time.

‘The Lost Moment’ was commissioned and produced by Gallery of Photography Ireland in partnership with the Nerve Centre, Derry~Londonderry.

Exhibition and engagement programme supported by the Department of Foreign Affairs and Trade Reconciliation Fund and Heritage Lottery Fund (UK).

The organisers thank RTÉ Archives and the Cain Archive at Ulster University for their support and collaboration. Thanks also to Belfast Archive Project, Dermot Kelly, Linen Hall Library, National Museums Northern Ireland, Regional Cultural Centre, Letterkenny and Remote Photo Festival. Gallery of Photography is proud to be supported by The Arts Council and Dublin City Council.