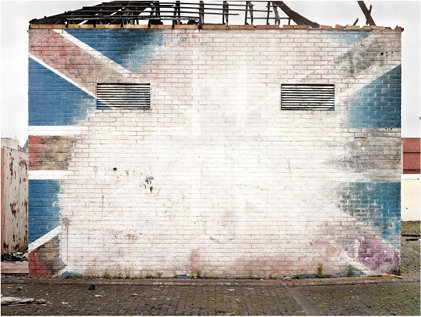 THE LONG VIEW brings together, for the first time, work by Irish artists who have established considerable international reputations and whose photographs are represented in major collections worldwide. The featured works are the result of a sustained process of engagement over periods of months or even years. The exhibition thus marks an important counterpoint to the increasingly disposable nature of photographic images in the digital world.

THE LONG VIEW addresses questions of landscape and memory, history and social change in both Irish and more global contexts.

David Farrell explores the sensitive subject of the search for those who were ‘disappeared’ by the Republican movement, in a series of landscape studies from a project that has spanned over a decade.

Anthony Haughey addresses the spectral presence of ghost estates on the contemporary landscape. Through Haughey’s lens, these eerie ‘monuments’ are a testament to the end of Ireland’s gold rush and the resulting cost of unregulated growth.

Richard Mosse also explores the visual possibilities of the monumental, in both the subject matter and the sublime scale of his work. Mosse recasts the sculptural form of an airplane wreck into a powerful symbol of the failure of modernity.

Jackie Nickerson also works on a very large scale and in a global context, but she focuses on how we inhabit our ordinary, everyday worlds, presenting her own, often ambivalent, subjective position. Made over a ten-year period, the work on showexplores the interplay between the global and the local in the newly affluent Gulf States.

Paul Seawright recovers visual fragments and texts from the surfaces of the urban landscape of his native Belfast. The work examines the continued play of competing claims to meaning and identity in a post-conflict context.

Donovan Wylie presents two bodies of work which operate on widely different registers. In his cool, objective aerial survey of British Watchtowers along the border, he deftly turns the surveyor into the surveyed; while in Scrapbook, he presents ‘the Troubles’ as an intimate aspect of lived experience, in a radical mix-up of the private and the public.

A full-colour publication with a text by Justin Carville accompanies the exhibition.

THE LONG VIEW is curated by Tanya Kiang and Trish Lambe. It is a featured exhibition of the PhotoIreland Festival 2011.