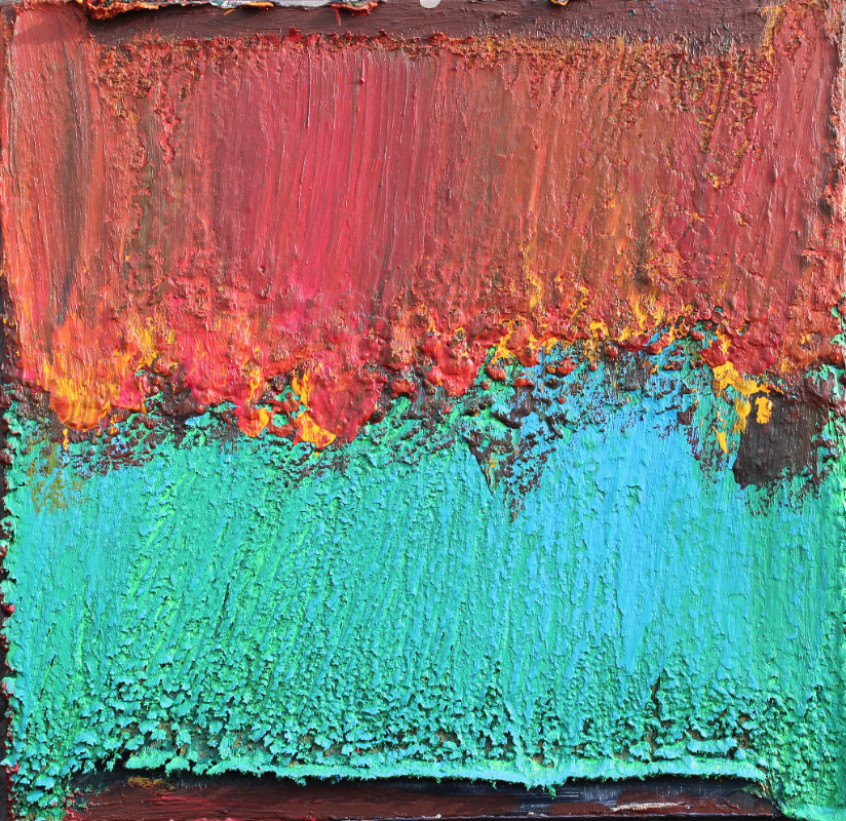 “there is a light somewhere”

The Laughing Heart is a group exhibition featuring seven artists from KCAT Studios, Callan, Kilkenny. The exhibition is the result of studio visits by GAC’s curator Maeve Mulrennan over the past eight months. Although a broad range of practices are represented, The Laughing Heart focuses on the duration and process involved in studio based practice through painting, sculpture and animation.

The paintings of Thomas Barron endure a process from figurative mark-making into the abstract, with each large canvas undergoing countless layers of drawing and painting. Declan Byrne’s work in painting and sculpture mediates on the materiality of paint itself, with colour broken down, echoing pointillist techniques. Mary Cody’s painting has developed over her career to incorporate different materials such as wool, while working with multiple layers of paint. The abstract work speaks of time, landscape and ritual, with Cody making visible the lengthy process of layering materials. Karl Fitzgerald’s semi-abstract paintings on paper also focus on practice, time and ritual, with new work being made by the artist each day he spends in the studio. It is Karl’s work that links again to Bukowski’s The Laughing Heart: ‘there is a light somewhere’. Each work, featuring a sunset or sunrise and most often a body of water, may, on its own, present as melancholic, particularly with Karl’s choice of colour. However it is when a whole week, month, or indeed a year’s worth of daily paintings are presented that the viewer can contemplate the subtle changes of each day. Also the fact that there are many, and many more to come, gives an overall optimism.  Fergus Fitzgerald combines text and image to present a multi-faceted approach to landscape to the audience; encouraging engagement and careful attention to detail. Sinéad Fahey’s work is full of colour and light. Playing with composition and perspective, Sinéad’s everyday observations are transformed into a kaleidoscopic world, leading the viewer to pay close attention to form, line and texture. The ever sardonic Andrew Pike presents two animations, referencing global politics via tennis and a love affair in one, and James Joyce and friends in another. Plays on words, puns and literal representations of metaphors, delivering Pike’s caustic wit via the lengthy and painstaking process of stop-motion animation.

Galway audiences will be familiar with Andrew Pike and Sinéad Fahey, who co-designed Macnas’ 2006 parade, The Big River, working with familiar faces such as Dave Donovan and Pete Casby. The parade also toured to Callan and the Kilkenny Arts Festival in 2006.

The title of the exhibition comes from the poem of the same name by Charles Bukowski. The title was chosen to represent the different processes of each artist: the poem speaks of light, duration and affirmation. What was apparent from the very beginning of the curation process was the dedication and focus each artist brings to their practice. Each artist works full-time in KCAT Studios, something which is reflected in their multiple past solo and group exhibitions and projects.

Thomas Barron’s work develops through a series of very carefully worked stages, starting with pencil and progressing to include multiple layers of paint, resulting in very colourful paintings with a strong sense of depth and subtle composition. Some are completed over a number of weeks and some over a number of months. Thomas Barron has shown work extensively in Ireland, including at the Kilkenny Arts Festival, Wexford Arts Centre, Burren College of Art, Axis Art Centre Ballymun, University College Cork, The Source Arts Centre and Dublin City Council Offices.

He has also shown internationally in Poland, Scotland, Switzerland, Australia, Luxembourg, Germany, The Netherlands and Finland.

Sinéad Fahey’s works draw on memory and imagination recalling important people and moments in her life and in the life of her friends and colleagues. Her works often give special attention to human interactions, gestures and scenes that often, in everyday life, pass by unnoticed.

She has also shown internationally including in Scotland, Australia, Switzerland, Luxembourg, Germany and The Netherlands.

Mary Cody works with paint and wool on canvas, creating images of internal and external landscapes. Mary has a highly committed work ethic, producing paintings that are as adventurous as they are methodological. Each painting, developed over a number of months, is overlayed repeatedly until the canvas is thick and heavy with layers of paint and wool. Mary Cody has shown her work widely in Ireland since 2001 including at Comhairle Offices Kilkenny, Kilkenny County Council Arts Office Gallery, Kilkenny Design Centre, Airfield Trust, Garter Lane Arts Centre, Áras Éanna, Burren College of Art, University College Cork, Kilkenny Arts Festival, Dublin City Council Offices, City Hall Cork and the Copper house Gallery Dublin. She has also shown internationally including in Germany, the UK, Australia , Switzerland, The Netherlands, Finland and Italy.

Driven by a strong work ethic, Karl Fitzgerald has a prolific output. Each individual painting is part of a greater body of work developed over many years, most often focusing on a particular landscape view. Karl has shown in many exhibitions in Ireland including at the Institute of Technology Dundalk, Berkeley Gallery Thomastown, St. Luke’s General Hospital Kilkenny, Dunlavin Arts Festival, Kilkenny Design Centre, Garter Lane Arts Centre, Áras Éanna, Burren College of Art, Butler Gallery Kilkenny and Axis Art Centre Ballymun. He has also shown internationally including in Luxembourg, Germany, Switzerland, the USA and the UK. He has taken part in many exchange projects including with Co-operations, Luxembourg, SKID, Germany, Pyramid of Arts, Leeds, UK.

Being a lover of linguistics and books, Fergus Fitzgerald enjoys thoroughly researching his subjects for paintings and using text within his paintings. Fergus paints images exploring various locations he has visited or aspires to visit. Such as Ljubjana Slovenia, Sienna Italy, Cefelu Sicily and Motzart’s birthplace in Salzburg Austria. In an exploration of text as drawing and text as imagery, each painting has text drawn onto the surface weaving his own personal thoughts on the subject of the work with researched facts. Fergus has shown work at Dublin City Council Offices, Kilkenny Arts Festival, The Glasshouse Gallery, Kilkenny and An Tearmann, Kilcullen Kildare.

For his sculpture works Declan Byrne carefully cuts pieces of dried acrylic paint found in painting pallets into small pieces, before glueing these small pieces of colour to found objects. There is a strong connection between his sculptures and paintings.  In Declans paintings he also transforms the world he sees in a very detailed way, by building imagery from multiple small sections of colours. Declan has shown widely internationally, including in Luxembourg, Finland, Germany, Australia, Switzerland, The Netherlands and the UK.  He has also shown in Ireland at the Kilkenny Arts Festival, Dublin City Council Offices, The Skibbereen Arts Festival and University College Cork.  He has been involved in a number of exchange and engagements projects, including with Project Ability Gallery, Glasgow, Scotland.

Andrew Pike is a founding member of KCAT Studio. He has travelled extensively to Holland, France, Germany, America, Australia, and Japan, cultural experiences and exchanges that inspire him greatly in his work. Andrew works in a variety of forms including animation, sculpture, painting and drawing. Andrew has shown widely in Ireland including at the Garter Lane Arts Centre, Crawford Gallery Cork, Institute of Technology Dundalk, Kilkenny Arts Festival, No Grants Gallery Dublin and the Butler Gallery, Kilkenny. He has also shown internationally in Denmark, The UK, Australia, Luxembourg, Germany, The Netherlands, Scotland and Italy. He has completed work for the Bunscoil McAuley Rice Percent for Art commission, Callan, Co. Kilkenny.

KCAT Studio is a professional artists’ studio supported by The Arts Council.  From an initial three artists in 1999, it has grown to the current fourteen artists who are supported by facilitators in all aspects of their professional development. There is a strong sense of community and mutual support between the artists and facilitators, which extends beyond the walls of the studio.  Working individually, all share, inspire and motivate each other. The group has executed commissions and exhibited as far afield as Australia, Japan, the United States and a number of European countries. Collaborating on projects with other arts organisations in Ireland and abroad is an important part of professional development.  Presenting at symposia, conferences and lectures, KCAT Studio Artists fulfil an important part of disseminating and advocating their own work and that of KCAT