The Land of Zero 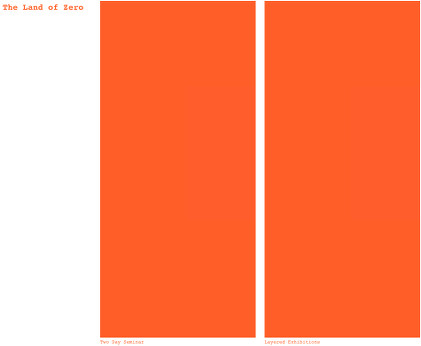 I came across the phrase The Land of Zero in a documentary on the Shakers.

The phrase allowed me to connect a group of ideas that I was gathering at the time: intangible moments which temper rational direction; the importance of creating intellectual flexibility around visual art practice; the changing context of visual art practice; the sustaining value of personal networks. Not a culture of definable outcomes, it welcomes the unintended consequence.

Rachel Warriner – A sort of old-girls’ network’: WAR, The Ad Hoc Committee of Women Artists and the foundation of the A.I.R. gallery

How to make space in the art world., 20 mins

In 1972 the doors of the A.I.R. Gallery opened for the first time. Based in SoHo, A.I.R. was the first all-women’s gallery to exist in New York. It was grounded on the need to counter the exclusion of female artists from the institutions of the powerful commercial gallery scene. With a stable of twenty artists, it represented a range of women, some whose work was expressly political and activist in intention, some who simply sought to redress the imbalance created by the inbuilt bias against women in the New York art world. Many of those involved in its foundation had been involved in the emergence of the women’s movement in the arts which had started in the late 1960s. With the formation of activist groups such as Women Artists in Revolution, The Ad Hoc Committee of Women Artists, Women Students and Artists for Black Art Liberation, and Women in the Arts, the question of the representation of women and the equality of the art world had been vociferously raised. In this way a new starting point was drawn and a new path created. The Gallery became “a symbol of a ‘sense of possibility’”.[1]

Drawing on this history, this paper will examine the ways in which alternative structures can emerge and confront seemingly monolithic institutional and cultural constraints. By coming together and imagining alternatives, artists were able to change the terms of debate and create a new way of working that challenged existing norms and created space for them to practice. Thinking about this in terms of the sense of possibility that emerged from it, this paper will consider the implications of this evolution.

The dependence of new technologies on established concepts of perception, such as the central perspective of a photograph or the linearity of time, is slowly being eroded. A new grammar of artistic production comes into play that opens up a field of artistic exploration. Sigune Hamann will present work relating to the changing perception of images, including stillness and movement with a focus on her process of capturing dynamics of urban environments in panoramic film-strips.

Q & A moderated by Anthony Haughey until 1 pm

Aengus Woods – Home and Homelessness: Speculations on the Language of Utopian Thought, 40 mins

Utopia means literally ‘no place’. Yet its homophone eutopia means ‘good place.’ This linguistic play cuts to the heart of the utopian paradox – a placeless zone of goodness. Nonetheless what if placelessness is less an obstacle to actualization than the very condition of its possibility? Touching on notions of home/beyond, inside/outside, public/private we will consider spatial rhetorics in poetry and art to ask whether alternate ways of using language might reveal new possibilities for action within that world.

Padraig Spillane – In Terms of Another or How much do you say?, 15 mins

Focusing on the influence of metaphor and other inventive comparisons; how does our use of language create the possibilities and environs for artistic practice? Particularly explored will be the unpredictable in relation to artistic practice and the facility of metaphor to reshape and elucidate on contemporary practice.

Q & A moderated by Anthony Haughey until 4 pm

In the 90’s physicists at the Institut für Experimentalphysik, Universität Innsbruck, conducted an experiment where information about the quantum state of one photon was teleported to another particle, one of an entangled pair.

The mechanics of how this works are difficult to grasp.

In 2013 a group of students at the Zagreb Academy of Fine Art attempted to understand the experiment by trying to enact it spatially through movement. This film records that endeavor.

American Post-War residential housing is constructed primarily of wood using a simple and easily assembled system of “framing” using structural timbers and cladding the structural frame with various manufactured sheet products such as plywood, plasterboard and decorative exterior siding panels designed to mimic traditional building materials. This approach to building is surprisingly consistent across the country although styles such as Ranch, Colonial or Cape Cod predominate in different areas.

Clive Murphy’s work comments on the manner in which the living space is a representation of a created personal philosophy, exploring the relationship between the radical and the domestic. The assertions of artists eventually percolate down to consumable objects that inhabit the homes of those who can afford them. Murphy challenges this idea while simultaneously making objects that people will have in their homes, commenting on how in the end capitalism absorbs all challenges.

Murphy will create a site-specific installation in the gallery from objects and materials garnered locally to challenge the space and create and an alternate reality within.

Q & A moderated by Anthony Haughey until 1 pm

The basic tensions explored in this talk are between claims for art’s autonomy (art as governed by its own laws) and claims for its heteronomous potential (art as subject to external forces). Both claims have a utopian aspect: on the one hand, by maintaining a provisional and contingent autonomy, art keeps open a zone of freedom for meaningful action and experience; on the other, the extent to which art acts within and upon the external world enables it to contribute to the forging of a better future. But both also have a dystopian aspect: by remaining autonomous, art isolates itself from wider world, prefering instead its sequestered zone; and, conversely, by giving itself up to the sway of powerful external forces, art risks its own co-option, compromise and even dissolution. This talk explores these problems in relation to the legacy of the great German artist Joseph Beuys, examining the tensions between a small number of contemporary artworks which relate to his powerful and controversial programme.