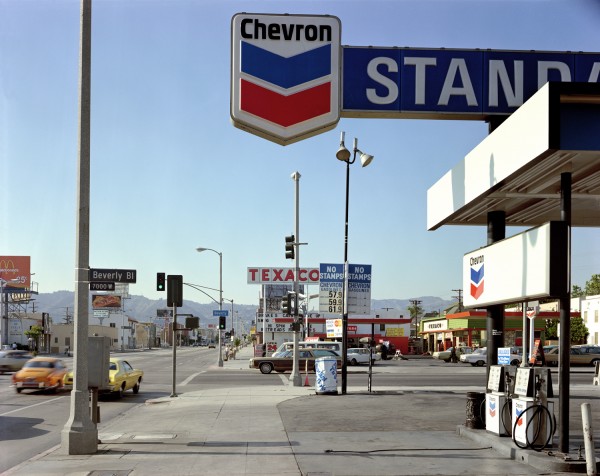 A project by The PhotoBookMuseum

On July 21st 1975 the intersection of Beverly Boulevard and La Brea Avenue entered photographic history. This is where Stephen Shore, considered one of the leading protagonists of the New Colour Movement, took his legendary photograph in front of a Chevron gas station. The resulting image, La Brea, constitutes the conceptual core of this project and installation.

Six young photographers from Germany were invited to Los Angeles in 2009-2010 to search for photographic points of reference to this iconic picture. As the goal of the project is not homage, a conscious decision was made to leave the criteria open. The photographers were allowed to focus on any aspect of the image, for example on iconography, form, aesthetics or its reception in history. These photographers are Jens Liebchen (Berlin), Max Regenberg (Cologne), Oliver Sieber (Düsseldorf), Olaf Unverzart (Munich), Robert Voit (Munich) and Janko Woltersmann (Hanover).

Developed by Markus Schaden, Photobook Studies are a completely new way of approaching the photobook. Presented in a rhizomatic map, materials are arranged graphically to illustrate the artistic, historical and social origins of the photobook. It is intended to show the people, events and developments that influenced the author within the structure of the book itself.

In 2010 German photographer Klaus Weidner started collecting negatives from the estate of an anonymous photographer (or studio) at auction. Several thousand photographs have been discovered, all shot between 1956 and 1979 in the vicinity of Los Angeles. For this reason, Weidner gives the pseudonym LA-X to the mystery photographer, whose presence is evident only in shadows he occasionally casts or through three types of car that reappear again and again as part of the image composition.

The style and the high technical quality of these photographs stays stable over a twenty year period but their function and purpose remain enigmatic. It seems they were made as visual evidence for contexts like mapping, surveying and forensics. The systematic approach to documenting streets and intersections apparent in this archive visually references some of the works by Ed Ruscha and the New Topographics Movement, but it also prefigures more contemporary visual phenomena like Satellite imagery and the aesthetics of Google Street View.

About the Photobook Museum:

The Photobook Museum was founded by Markus Schaden in 2014 as a tribute to this central form of expression within photography. Its first incarnation was housed in the massive Carlswerk space, a former industrial site in Cologne which was filled with containers full of photobooks; a selection of individual PhotoBook studies; a book research lab run by Dortmund university; workshop areas and an almost-to-scale replica of ‘Café Lehmitz’ immortalised by Anders Petersen’s book of the same name. This installation for Gallery of Photography Ireland was curated by Markus Schaden and Linn Seeger. www.thephotobookmuseum.com