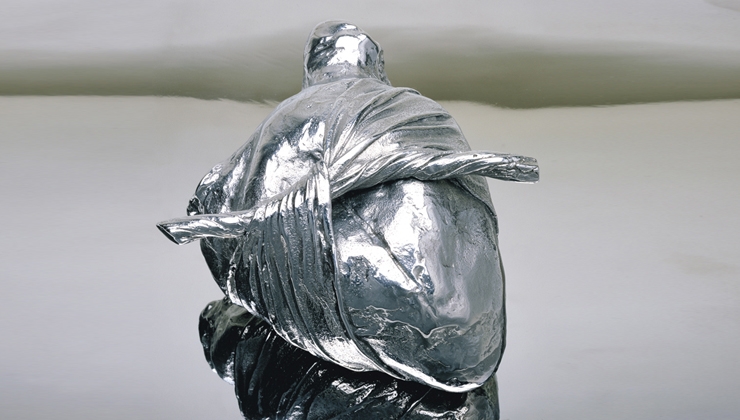 We invited a further 20 artists to respond to the subject with new or existing work.

An essay by Catherine Marshall, former head of collections at IMMA accompanies the exhibition, an extract of which is below.

‘What shall I do with this absurdity’? the poet William Butler Yeats cried and went on to reveal that the absurdity in question was his own heart, trapped in an ageing body:

O heart, O troubled heart — this caricature,
Decrepit age that has been tied to me
As to a dog’s tail? [1]

Yeats was dealing with serious but personal demons – worries about passion and imagination frustrated desires to achieve things that he feared impossible. He was not locked down or worried about pandemics, and indeed neither was Graphic Studio Gallery when they first mooted the idea for this exhibition many months before the first signs of Covid 19 were named and identified. Yet in addressing both human mortality and passion, Yeats pinned down precisely the scientific and emotional drivers that have animated lives on a global scale since the beginning of this year. The ongoing experience of living, working and trying to protect ourselves and those we love has placed great demands on artists and their values as well as on the wider society. We are pulled between a backdrop of medical and scientific reports about the status of the virus and the need for artistic expression to give meaning to what it is doing to us.

While we oscillate between science and something more fantastical but emotionally charged it is reassuring to know that artists have been doing just that for generations, and when it comes to the heart, the two can never be fully separated. Brian O’Doherty’s Portrait of Marcel Duchamp, one of a series of cardiographs from the 1950s, emphasises the point that the heart responds to different stimuli in different ways, speeding up and grinding to a halt as experiential stresses dictate, and constantly changing with the mood or the moment, so no single cardiograph defines the man. Many of the artists in this show follow O’Doherty’s lead, proferring images of the heart that connect man to nature or science, or both (Ruth O’Donnell, Rowena Quill, Sarah Roseingrave, Niall Naessens, Jack Barrett, Vaida Varnagiene, Niamh McGuinne and Jenny Lane).

Cecily Brennan and Andrew Folan stress the heart’s physicality alongside its vulnerability. Brennan’s three dimensional Bandaged Heart from the 1990s’ encases the form in a precious metal and ties it into a knotted bandage that suggests feeling rather than cure.

Thomas Barron and Gypsy Ray’s Untitled (heart), their last collaborative work before Gypsy’s untimely death from cancer at the start of the lockdown take an abstracted look at the heart, built up of Thomas’s drawing of multiple life cells, encased in a protective painted halo by Gypsy.  And it is also the abstract emotional qualities of the heart that are presented by Mary Fitzgerald, Anna Maye, Yoko Akino and, cooled to background wall paper by Tom Phelan and the flat colours of advertising by Maser.

– Extracted from an essay by Catherine Marshall, July, 2020

The complete text will be available on our website by the 18th of July.