The Ghost in the Machine 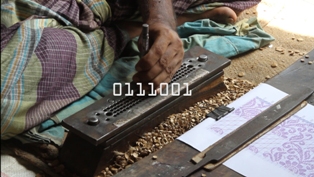 Galway Arts Centre will begin its Autumn programme with The Ghost in the Machine, featuring new work by artists Aideen Doran and Marianne Keating. The exhibition’s title comes from philosopher Gilbert Ryle’s description of Decartes’ mind/body substance dualism; where mental activity carries on in parallel to physical action or labour, but where their means of interaction are unknown. According to Descartes, the mental does not have extension in space and the material cannot think. Substance dualism is a theory compatible with most religious beliefs that immortal souls occupy an independent realm of existence separate from the physical body. The featured artists’ works challenge this theory through installations that explore the relationship between mind and body. In Aideen Doran’s video installation, mind / body dualism is examined through the lens of labour, and the different values assigned to physical and immaterial labour. Marianne Keating’s work uses the archive and memory of one person to explore the origins and consequences of social and political upheaval.

For The Ghost in the Machine, Aideen Doran presents work derived from research conducted while resident with Britto Arts Trust in Dhaka, Bangladesh in the Summer of 2013. The Revolutionary Machine is an immersive sound and video installation that investigates the textile and garment industry in the context of Doran’s wider research on the changing value of labour and the subtle shifts between production and non-production in the global economy.

The Revolutionary Machine takes its title from Karl Marx’s writings on the English textile industry, the beginning of mass production, in which the revolutionary machine was the sewing machine. Doran’s video work draws intuitive links between the first technologies of mass production and the computing technology and binary code that drive so much current ‘immaterial’, knowledge-based, and creative production. Through her work, Aideen is interested in creating dialogues around the dual role of the artist as both a producer and a labourer in an information economy, exploring the potential of the artist’s labour to resist the imperative of productivity, and to subvert the purposes of technology.

Aideen Doran is a Northern Irish artist currently based in Glasgow. She studied at the Glasgow School of Art and the University of Ulster, and is currently conducting a practice led PhD with Northumbria University. She has exhibited in group exhibitions throughout Great Britain, Finland, Berlin and Ireland, including EV+A 2008, and has received awards from the British Council and the Arts Council of Northern Ireland. Recent exhibitions include After Hours at Glasgow Project Room, Glasgow (2014), Looking for Work at Regina Rex, New York (2014) and Momentous Times at the CCA Derry-Londonderry (2013), with forthcoming shows in Platform Arts, Belfast and the Pipe Factory, Glasgow.

In Search of Trevor Owen the body of work which London based Irish artist Marianne Keating began during a residency in Jamaica in Summer 2013. The residency focussed on a Beach House in Montego Bay, which was purchased by Derek Bishton (former editor of The Daily Telegraph) in 2005. After acquiring the property the contents of the house were found to be fully intact including the personal belongings of the deceased former resident, 1960’s Jamaican fashion designer, Trevor Owen. The land currently occupied by the Beach House was originally part of the estate of Lord Lyle (Tate & Lyle Sugar/ Tate Modern etc.) and the West Indies Sugar Company, highlighting Jamaica’s colonial heritage. Through the artist’s residency in the House and study of Trevor Owen, the socio-political status of Jamaica was re-contextualised and presented as a multi media installation in Galway Arts Centre. In the artist’s search to find Trevor Owen, the social and political climate of the time in Jamaica intertwines with his story and the stories of the people connected to him. Their stories offer a wider context to a climate of extreme financial hardship, worsened through years of sanctions by the IMF and Jamaica’s current control by other countries, not through direct ownership but through the mechanism of debt. Jamaica’s colonial past is all encompassing and has a direct affect on it’s current economic status: it’s fight for independence and history rooted in the slave trade and indentured labour is still evident today. Irelands own ties are clearly evident with Irish immigration to Jamaica occurring primarily through importation of Irish slaves. After Independence from Great Britain in 1962, Jamaica’s hope for prosperity as a free state began to slip from its fingers.

Marianne Keating graduated with an MA from the Royal College of Art, London in 2013 and a BA(hons) in Fine Art from Limerick School of Art and Design in 2002. Since her BA she has exhibited in numerous solo and group exhibitions in Ireland, London, Paris, New York, Melbourne, Berlin and Shangai. Keating has participated in residencies and has received several awards from bodies including the Arts Council and Cork Printmakers. She was short listed for the art campaign for The Beastie Boys’ last album, Hot Sauce Committee Part Two.

The Ghost in the Machine runs from September 5th to 27th in Galway Arts Centre, 47 Dominick Street. The gallery will open until 10pm on Culture Night; Friday 19th September.