The Bandits Live Comfortably in the Ruins: Artists’ Talk 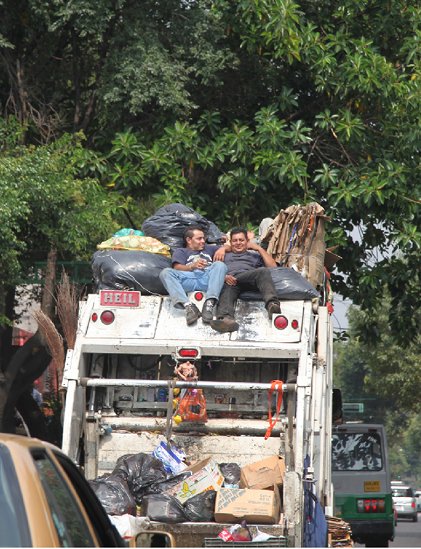 Looking at the parallels between Mexico and Ireland, artists Yoshusa Okon (Mexican), Anthony Haughey and Elaine Byrne (Irish), will discuss their practices examining Documentary Forms as a means of exploring the unstable relationship between Fact and Fiction, the death of Journalism and the rise of, seemimgly, non-aligned forms such as Wikileaks, Reality TV and Facebook among others. Chaired by curator and writer Helen Carey, this three way discussion will examine contemporary forms of Knowledge and Power and how the consequent Aesthetic Economies relate with artistic practices.

Yoshua Okon lives and works in Mexico city. His video work is like a series of near-sociological experiments that blend staged situations, documentation and improvisation, questioning habitual perceptions of reality, truth, selfhood and morality. Okon has shown his work at the Kunstwerke in Berlin, P.S.I. MoMA, the New museum in New York, Istanbul biennial, Galleria Francesca Kaufmann in Milan, the Project in New work and Galeria Enrique Guerrero in Mexico city amongst others. In 1994 he co –founded La Panaderia, an independent space dedicated to the exhibition and discussion of contemporary art which he directed for 8 years. He is founder and part of the artistic council of SOMA.

Anthony Haughey is an artist and a lecturer in DIT where he supervises doctoral practice-based projects. He was a Research Fellow (2005-8) at the Interface Centre for Research in Art, Technologies and Design at the University of Ulster Belfast, where he completed a PhD in 2009. During this time in Belfast he organised public discussion forums around Art and Contested Spaces and curated public art projects. He works from the premise of a principal situatedness of art in place and community and its connectedness through dialogic exchange. He employs a range of strategies, from direct engagement with groups and individuals to provocative public interferences, which expose the structures of power that often, inflict vulnerability and marginalization on individuals. He recently exhibited ‘Prospect’, a video projection across the harbour in Galway, part of TULCA 2010 Festival of Visual Art, and ‘Guest’, a collaborative video piece commissioned by Project Arts Centre screened recently at Crawford Art Gallery. He is a member of Kuratorisk Aktion and Fire Station Artists’ Studios Think Tank Programme. He is currently editing an anthology, Art, Media and Contested Space. Project Arts Centre will publish his artists’ book, State, (with Belfast based German artist Susanne Bosch) in April.

Elaine Byrne studied at UCD, the Frink School of Sculpture, Stoke on Trent, and in 2009 completed a MA in Visual arts practice with the Institute of Art, Design and Technology, Dun Laoghaire. ‘Message to Salinas’, Byrne’s solo exhibition is currently running at the Oonagh Young Gallery. The accompanying booklet has been selected for the 2011 Berlin Reading room and the video ‘Message to Salinas’ will be shown in March at Artprojx as part of Armory art fair, New York. She had a solo show at the Leinster Gallery in 2009 called ‘They Have Eyes’ and her work has also been included in many exhibitions and festivals such as ‘Tulca’ Festival of Visual Arts in Galway. Future exhibitions include a solo show entitled ‘The Irish King of Mexico’ at Atrio Cultural Space in Mexico City.