The 38th EVA International at IMMA 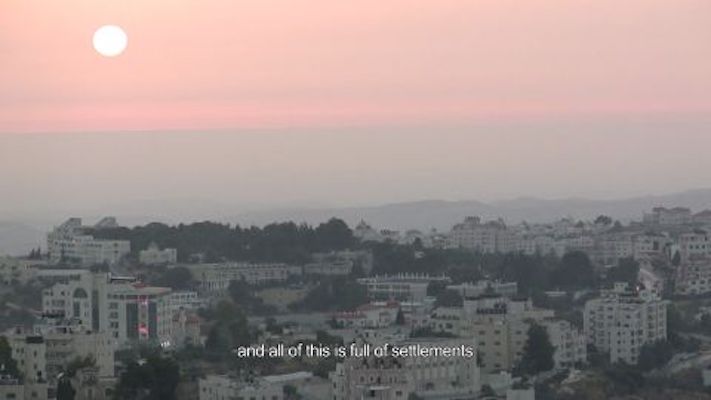 Devised as ‘Cosmology of Exhibitions’ by Curator, Inti Guerrero, the 38th EVA International – Ireland’s Biennial of Contemporary Art takes place across various venues in Limerick city with an expanded programme to include IMMA, Dublin. The exhibition at IMMA features works by contemporary artists exploring the politics of communication.

Works at IMMA include Locky Morris’s 1992 installation Comm which references the history of clandestine messaging between Republican prisoners during the conflict in Northern Ireland, Roy Dib’s Mondial 2010 which uses the video form itself to transgress sexual and territorial boundaries in the Middle East, and a sequence from Marlon T. Riggs’ seminal Tongues Untied film, exploring language in the African-American gay community.

Presented as part of an exhibition and production partnership between EVA and IMMA, and curated by Inti Guerrero, this exhibition is a remote but integral segment of the biennial that takes place across various venues in Limerick from 14 April to 8 July 2018. For more information on EVA please visit www.eva.ie

Works on Exhibition
Locky Morris, Comm (1992) is a work that references the system of covert messaging used by Republican prisoners during the Troubles. The practice involved writing tiny messages on toilet or cigarette paper and wrapped in cling-film, typically exchanged through a kiss between prison visitors and inmates. Comm is an installation that uses similar materials, but enlarged (as though magnified) as a series of wall-mounted semi-figurative objects.

Roy Dib, Mondial 2010 (2014) is a discussion of institutional borders in modern day Middle East. It uses video as a device to transgress boundaries that are inflicted on people in spite of them. It is a travel film made in a location that doesn’t permit travel, starring two male lovers, in a setting where homosexuality is a punishable felony. Shot with a hand-held camcorder, Mondial 2010 borrows the aesthetics of a travel video log. It normalises the abnormal, and by doing so creates its own universe of possibility.

Eva and IMMA
Devised as ‘Cosmology of Exhibitions’ by Curator, Inti Guerrero, the 38th EVA International – Ireland’s Biennial of Contemporary Art takes place across various venues in Limerick city with an expanded programme to include IMMA, Dublin. Programming at IMMA encompasses Production Residencies for artists Sam Keogh and John Rainey to work on new commissions by EVA International supported through the Arts Council Ireland’s Open Call programme and an EVA exhibition in the Project Spaces at IMMA featuring works by Locky Morris, Roy Dib and Marlon T. Riggs. Running from 06 April to 27 May 2018, the exhibition at IMMA will be launched with an introductory talk by EVA Curator Inti Guerrero. EVA International opens across other venues in Limerick city on 13 April and continues until 08 July 2018.

The EVA Production Residency with Sam Keogh | Jan – March 2018
Sam Keogh’s Production Residency focused on a new commission by EVA International supported through the Arts Council Ireland’s Open Call programme. While on residency at IMMA Keogh developed a new installation and performance which will be opened on 14 April 2018 in Limerick as part of EVA International. The work takes the form of a vast defunct control panel which sets the stage for performance where an astronaut returns to addresses the audience directly in the mode of a TED talk or Silicon Valley Sales pitch. Sam Keogh’s work melds performance, installation and sculpture into scrappy and mutable wholes. Sculpture and collage often serve as props and mnemonic devices for performances but are also in excess of these functions, spilling over with idiosyncratic detail and extraneous information.

The EVA Production Residency with John Rainey | March 2018
John Rainey‘s short IMMA Production Residency focused on a new commission by EVA International supported through an Arts Council Ireland’s Project Award. The resulting work will be exhibited at The Hunt Museum, Limerick as part of the 38th EVA International, 14 April – 08 July 2018.
About The 38th Edition of EVA International
The 38th edition of EVA International takes its starting point from the painting Night’s Candles are Burnt Out (1927) by Irish artist Seán Keating. The painting presents an allegory of the Irish psyche at the advent of the construction of Ardnacrusha, a hydroelectric dam, built that same year on the border of County Limerick. Ardnacrusha was a symbol of early twentieth century engineering, which accelerated the Irish economy and radically shifted the society of the new state. Night’s Candles are Burnt Out takes part in the dialogue of contemporary and historical artworks addressing narratives on nationhood, electricity, and the metaphors of power. Rather than a monolithic thematic exhibition, the biennial exhibition proposes itself as a kaleidoscope of essayistic, retinal and bodily narratives of artistic presentation.

The 38th EVA International has no title, breaking with a tradition of the biennial that dates back to 1990. This decision, taken by Guerrero is designed to emphasize the word ‘International’ that is central to EVA’s identity. Guerrero explains, “in our current state of nationalisms, hard-borders, protectionism and a complete change of course in humanity, where the liberal belief of a ‘never again’ seems to be dismantling, the word ‘International’ suddenly carries an important weight worth embracing. Since its foundation in 1977 in Limerick, EVA has been a forerunner in understanding the world through art in a transnational, transcultural, international dialogue, presenting its contradictions, anxieties and possibilities.”

About the Curator
Curator of the 38th edition of EVA International in 2018 Inti Guerrero (b. 1983, Bogotá, Colombia) is a young and highly acclaimed curator who is based in Hong Kong. Guerrero is currently Estrellita B. Brodsky Adjunct Curator of Latin American Art in Tate, London and was previously Associate Artistic Director and Curator at TEOR/éTica, an independent not-for-profit art space in San José, Costa Rica. After studying History and Theory of Art and Architecture at the University of Los Andes in Colombia and the University of São Paulo in Brazil, he completed the Curatorial Programme at De Appel arts centre in Amsterdam.

Locky Morris (b. 1960, Ireland) has exhibited both regionally and internationally since the mid-1980s. Morris’s work touches on a broad range of subjects, from the highly personal and familial, to the political. Renowned for his early work that explicitly dealt with The Troubles in Northern Ireland, Morris has also received acclaim for his quietly powerful and intimate work, infused with a dark wit. Morris has presented solo shows at Naughton Gallery, Queens University, Belfast 2016; mother’s tankstation, Dublin 2010; and Mannheimer Kunstverein, Germany 2008; and recent group shows at The Mattress Factory Museum, Pittsburgh, USA 2017; the Museum for Contemporary Art, Belgrade 2014; and the Czech Museum of Fine Arts, Prague 2006. In 2016 Morris received the Irish American Cultural Institute’s O’Malley Award for Art.