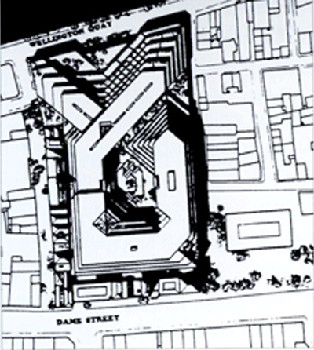 In this exhibition, guest curator Chris Fite Wassilak takes the 30th anniversary of Temple Bar Gallery + Studios (TBG+S) in 2013 as his starting point. Thinking about the history and uses of the TBG+S building, Fite- Wassilak proposes a temporary reorganisation of the gallery and the studios, a gesture intended to raise questions of accessibility, audiences, and the aspirations and realisation of the Temple Bar area itself as a ‘cultural quarter’.

In preparation for the exhibition, Fite-Wassilak invited a series of short-term residencies and site-specific commissions which resulted in a variety of artistic responses to the TBG+S building. These works look at urban space, cultural distances, and alternate histories. From an ‘Immodest Proposal’ pamphlet by renowned author Iain Sinclair, New York based artist Josh Tonsfeldt’s visit to the gallery in absentia via an Italian novelist, to Jim Ricks’ ‘gift’ to the new McDonald’s restaurant opening next door to the gallery, each contributor to the exhibition provides their own dislocated commentary on the exhibition space.

Under the proclamatory title ‘Temple Bar Gallery and Studios Are Dead’ (inspired by Tom Stoppard’s playful post-modern excavation of Hamlet in his 1966 play (and later film) Rosencrantz and Guildenstern Are Dead.), the exhibition poses a series of reversals and re-imaginings, both hypothetical and real, across a range of media that cast a view askance on the TBG+S building and its roles as a social institution and physical presence.

Chris Fite-Wassilak is a writer, curator and critic based in London. He is a regular contributor to Art Monthly, Art Review, Art Papers, frieze, and Monopol. Recent curatorial projects include Open;Wait with Silvia Bächli and Margrét H. Blöndal at i8 Gallery, Reykjavik, PRECAST with Dennis McNulty, and Lta… a subtitle with Hreinn Fridfinnsson, Damien Roach and Megan Rooney at Maria Stenfors, London.

Prinz Gholam is an artist duo that consists of Wolfgang Prinz (born in 1969, in Leutkirch, Germany) and Michel Gholam (born in 1963, in Beirut, Lebanon). Selected solo exhibitions include Galerie Jocelyn Wolff in Paris, France (2008), and Centre d’art Contemporain (CAC) in Brétigny -sur-Orge, France (2007). Selected group exhibitions include 6th Berlin Biennale for Contemporary Art in Berlin, Germany (2010), Urban Memories at Heimatmuseum Berlin-Neukolln, in Ganghoferstrasse (2010), Living Currency, curated by Pierre Bal-Blanc and Ana Janevski, at Museum of Modern Art in Warsaw, Poland (2010), La nuit des tableaux vivants at musée des Augustins, at Printemps de Septembre in Toulouse, France (2009), You are Living in a Space like Mine at GfKFB in Berlin (2008), and Living Currency at Tate Modern, London (2008). They are represented by Galerie Jocelyn Wolff in Paris. They live and have been working as collaborators in Berlin, since 2000.

Barbara Knezevic (born Sydney, Australia) lives and works in Dublin. She attended the Sydney College of the Arts (Bachelor Visual Arts) and National College of Art and Design, Dublin (Master of Fine Art). Recent exhibitions include Where exists a remnant, The Dock, Carrick on Shannon (2013); Future Perfect – We are here, Rubicon Projects, Brussels (2013); This must be the place, Golden Thread Gallery, Belfast (2013); Whitewashing the Moon, Project Arts Centre, Dublin (2012); Gracelands, Circling the Square (2012); Plastic Art, RUA Red (2012); After the Future, eva International Biennial of Art (2012). Forthcoming exhibitions include On Curating Histories, curated by Kate Strain (2013/2014)

Sean Meehan is a New York-based musician. Much of the work he produces attests to his interest in the discourses around urban planning, including and most notably, his annual summer concert series with saxophonist Tamio Shiraishi (now in its 17th year), and his Super-8 films. Both of these are grounded in a similar desire to unfold elusive or liminal urban places. In May 2013, he performed at ‘A survey is a process of listening’ at the Whitney Biennial. He has released a number of recordings and compositional things/objects; including most recently, a highly abridged audio book of 19th century physicist, Hermann von Helmholtz’s classic tome On the Sensation of Tone as a Physiological Basis for the Theory of Music. He holds a Masters degree in Urban Planning.

Jim Ricks studied at the National University of Ireland, Galway/Burren College of Art and the California College of the Arts. Originally from California, he has lived in Ireland for 8 years and currently has a studio in Temple Bar Gallery & Studios. Ricks was selected for Futures 12 at the Royal Hibernian Academy in 2012. In the last two years Ricks has created and toured the popular public work the Poulnabrone Bouncy Dolmen. Alongside his own exhibitions he has curated shows in Dublin, London, Galway and San Francisco. As a member of Cause Collective he recently toured to Afghanistan with the collaborative project: In Search of the Truth (The Truth Booth).

Iain Sinclair FRSL (born 11 June 1943) is a British writer and filmmaker. Much of his work is rooted in London, most recently within the influences ofpsychogeography. Sinclair was born in Cardiff, and educated at Trinity College, Dublin (where he edited Icarus).[1] He attended the Courtauld Institute of Art (University of London), and the London School of Film Technique (now the London Film School).

His most noteable books include the non-fiction London Orbital; in which he walks the entire length of the M25, Edge of the Orison, a psychogeographical reconstruction of the poet John Clare’s walk from Dr Matthew Allen’s private lunatic asylumin Epping Forest, to his home in Peterborough. Hackney, That Rose-Red Empire: A Confidential Report is a examination of the borough of Hackney, in which Sinclair lives. .Ghost Milk is a critique of the preparations for the 2012 Summer Olympics and their effect on the city of London and residents of Hackney. Sinclair’s new book American Smoke will be published in 2013.