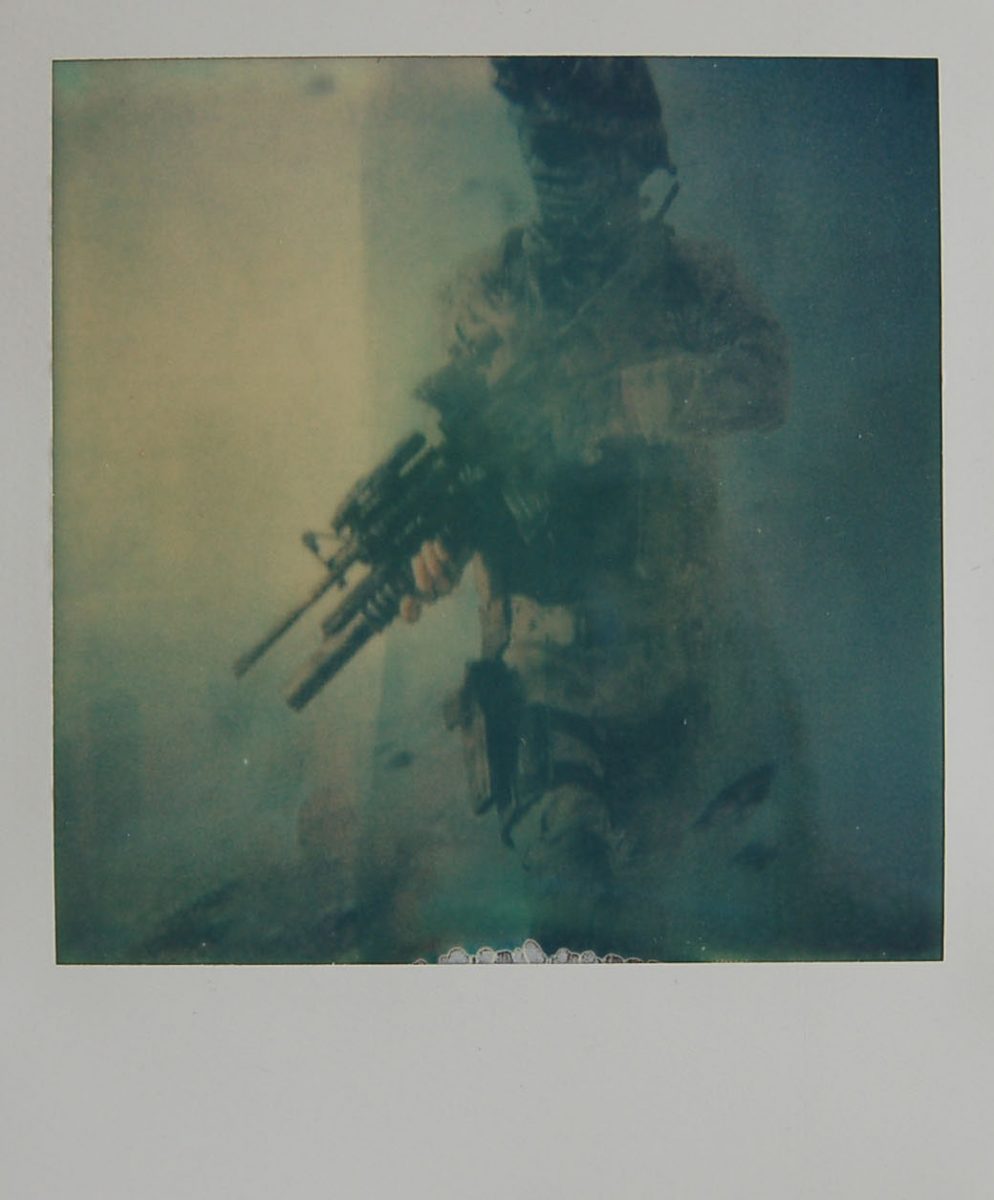 The exhibition takes as its jumping off point Martha Rosler’s Fascination with the (Game of the) Exploding (Historical) Hollow Leg – a multimedia installation from 1983 which included a simulated war room with altered maps, nuclear-weapons descriptive material, recruitment posters, military clothing, a slide show of U.S. and European protest marches and posters, giant newspaper collages, a video loop, an audio tour of North American Radar Air Defense, a library of books on war, and more — all topped by a giant cargo parachute. Here, for RUA RED, the work is reimagined in 2015 where artworks by various artists engage in a dialogue beneath Rosler’s original cargo parachute.

Building on this scenario of a discombobulated war room, Jim Ricks has created a giant rug covering the gallery floor, on the subject of drones, and noting which countries use which aircraft, and where. It acts as a chilling reminder of observation and unseen attack – and is further reinforced by the fact that the rug has been hand made in Afghanistan. Visitors will be able to walk across and sit on this giant reference map in looking at the rest of the exhibition.

Theresa Nanigian will create a new large wall installation about the language of armed conflict and terrorism, its shared vernacular with commerce and sports, and not unlike the teaching aids plastered on Montessori walls, its use of jargon, buzzwords and euphemisms to guide, instruct and manipulate our thinking.Suzanne Treister will exhibit a series of A2 works entitled ‘Post surveillance art’ navigating the post-Snowdon age. Sean Snyder will exhibit Analepsis, composed of a series of excerpts taken from satellite television news reports. The individual 1-4 second clips are used to introduce the viewer to a given location. Through his method of re-editing the material and omission of the sound from the original news programs, Snyder restructures the footage, revealing the potential of a place to mean more than one thing and pointing to the cinematographic quality inherent in television news.

Jane Queally’s polaroid photographs blur the line between fact and fiction – images are taken from both newspaper reportage on conflict and other from Playstation games, we are never certain of the source of either. Eva and Franco Mattes continue this investigation into loss of a sense of real in the online world, with Freedom, an online performance within an online war videogame in which Eva pleads with the other players to save her because she is “making an art performance”. The result is her being killed again and again.

Alan Butler’s work explores how the dialogues which shape our understanding of the world are external constructs; mere extensions or ideological bi-products of democratic, free-market-capitalist societies. The recurring use of appropriated content is a device that reveals the limits and unoriginality of the ways in which we communicate. Butler’s subject, the Internet, is pulled apart by appropriating particular artefacts he has found online that not only underline how much web content perpetuates the total belief in the medium by which it is transmitted, but importantly reflects the utter atomization of society in the 21st Century – in all its HD, real-time, surround sound, phantasmic banality.

Cliona Harmey’s Data-sky uses live-transmission information received from passing planes—combined with images of the sky—as a form of live electronic writing, updated each time another plane enters the range of the receiver The work exists at the intersection of sculpture, object hacking, DIY/enthusiast electronics and live transmission. It combines natural and man-made systems.

This diverse and eclectic show goes from the overtly political to the personal, and seeks to foster a sense of discussion and debate within a contemporary ideas chamber.