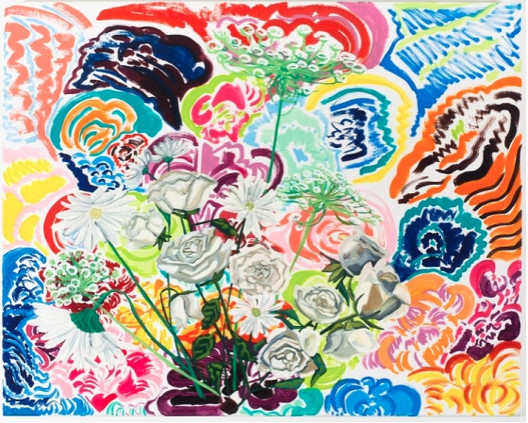 This is a two-person show with Irish artist Tadhg McSweeney and Mexican artist Aliza Nisenbaum. Tadhg McSweeney paints and makes sculptures with a seamless connection between their form, function and colour palette. Yet each work has a defined independence and abstraction within the body of work. His work disturbs notions of the conventions of representation, display and perception. Sculptures, devised of paint, glass, paper, residues of glue and silicon, of other sculptures, wood and various recycled materials, are the frames to themselves and to the paintings positioned behind them. The work plays with the potential of the found and used material to create a vision of a new world.Objects, structures, monuments and landscapes for a new utopia.

Aliza Nisenbaum’s work focuses on the liminal space between attention and intention through observation. Her work includes portraits of immigrant communities in the US, to still life compositions. Her process combines a close viewing of people and items while considering the ethics of representation and the ‘other’. Recently her work is focused on paintings of flowers, which explore a different ethics of exchange. Flowers are emotional and economic currencies—cross-border and transpersonal vehicles. They are modest emblems for the flows of labour, money, and goods in a globalized world. The exchange of perishables, such as flowers, is an economic form available to immigrants in both the US. and Mexico. Not unlike the undocumented immigrants that transport and tend to them, flowers are finite silent things, natural things that cannot speak. They are portraits without faces. Both artists approach representation and the potontial for new existences.