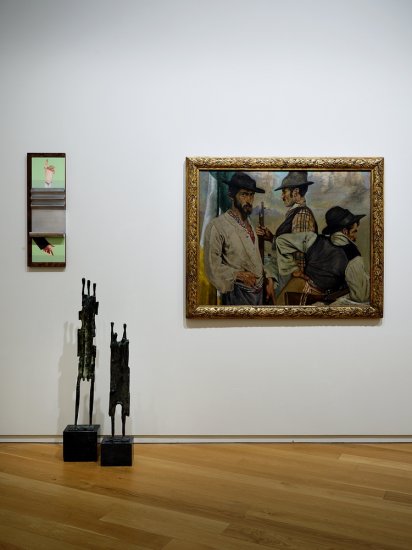 This exhibition is conceived in parallel to Studio & State: The Laverys and the Anglo-Irish Treaty, which is a collaboration between Hugh Lane Gallery and the National Museum of Ireland and is currently on view at Collins Barracks.

Tableaux Vivants, co-curated by Logan Sisley with artist Niamh McCann, features a selection of works from the collection centred around three recently acquired works by McCann: Sculpture Picture Furniture Gesture #1–3. In them, McCann restages gestures portrayed in iconic statues of James Larkin and Edward Carson. These gestures reference images from art history ranging from ancient Greek sculptures to religious iconography and instigate a dialogue with selected works from the collection.

The gestures inherent in the artworks selected for Tableaux Vivants were variously used to convey authority, surrender, to dismiss or to rejoice. The focus and thinking behind the selection was to explore the historical narratives, meaning and power dynamics inherent in these art works.

Tableaux Vivants or “living pictures” originally referenced the presentation of a static scene by a group of actors, a popular entertainment in the early 20th century. Tableaux Vivants invites viewers to engage with our historical and contemporary collection in the context of the centenary of the Anglo Irish Treaty of 1921 making their personal associations and connections with the selected works.

Niamh McCann contributed the essay, “Foreground, middleground, background,” to our Studio & State catalogue, which is available in our bookshop.