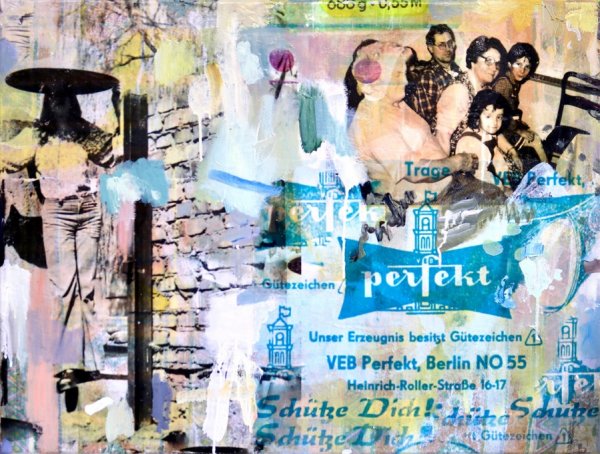 In her Memento series, Wawra works in mixed-media painting that incorporates photography. Acting as a spectator in her own life, she is connecting autobiography to socio-political and cultural history, particularly her growing up in the German Democratic Republic. She was born into and spent her childhood in a country and system that no longer exists. On patterned fabric from the domestic private sphere, she employs print and paint processes and layers to create a collaged composition. Merging the layers through the transparency inherent in her process, the fabric remains visible in all areas not covered by the opaque ink from transfer printing. This foundational layer is interpreted through Wawra’s gesture. The paint layer can then act as a glue, a combining element of the printed imagery and the fabric pattern. It also pushes Wawra’s emotions across the personal narrative around her parents’ past. It enhances, it obstructs, it communicates with the visible layers in the piece and the invisible layers within her psychological involvement which informs each intervention interweaving print and paint.

This allows for the creation of something that hovers between the real and the imagined; a memory. Portale (Portals) is an accumulative piece consisting of 28 individually titled works, fragments of the past, memories, imaginings from Wawra’s family photo archive dating from the late 1970s and 80s and advertising, propaganda and product packaging from GDR times. These pieces are constructed to work together as well as individually, inherent in the creation was breaking of an image from one canvas to another, a spreading or bleeding of the individual onto the whole.

It deals with personal and communal identity, the dreams and promises, the propaganda and material realities in East Germany. In its symbolism, Portale (Portals) looks into a future and like any future, it is unknown, uncertain and bound to bring about unexpected changes on an individual and societal level.