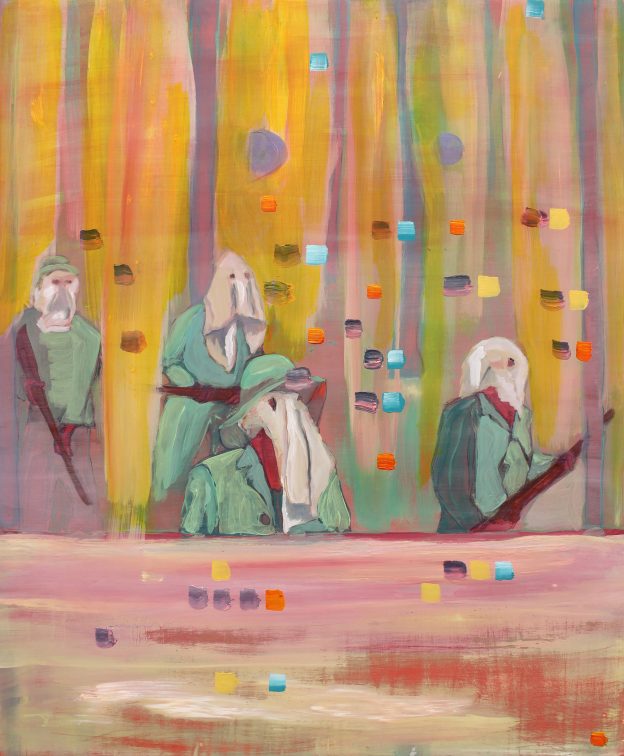 Garter Lane Arts Centre is delighted to present ‘Borderland / Memento’, a joint exhibition of mixed media painting by emerging artists Joseph Heffernan and Susanne Wawra. Heffernan’s work presents characters as quixotic protagonists in a conflict between abstraction and figuration while Wawra offers a patchwork of characters drawn from personal and familial memories, alongside new interactions in Waterford.

Susanne Wawra is a graduate of Fine Art Painting at NCAD and winner of the Talbot Gallery and Studios Most Promising Graduate Award 2016. She has exhibited widely both in Ireland and overseas, most recently in the LAB Gallery Dublin. She has participated in group shows at the Mart Gallery, Steambox, The Workman’s Club and Stoney Batter Guild in Dublin, the Island Arts Group in Northern Ireland, Chase House in London as well as group shows in Italy, Scotland and America, with screenings of her audio visual work at festivals in Germany, Spain, the U.K. and the US.

Joseph Heffernan received his BA Honours in Fine Art from the Crawford College of Art and Design in 2009 and an MFA in Painting from NCAD in 2016. He was a founding member of Sample Studios Cork. Recent group shows include GOMA Gallery Annual Members Show (2017) We are all nonetheless under the influence of Gravity, NCAD Annex, Dublin (2015), Breaking Sensations, Hive Gallery, Waterford (2015) and Between here and there, Pallas Projects, Dublin (2014).

This exhibition continues alongside At Face Value: The National Self Portrait Collection of Ireland.