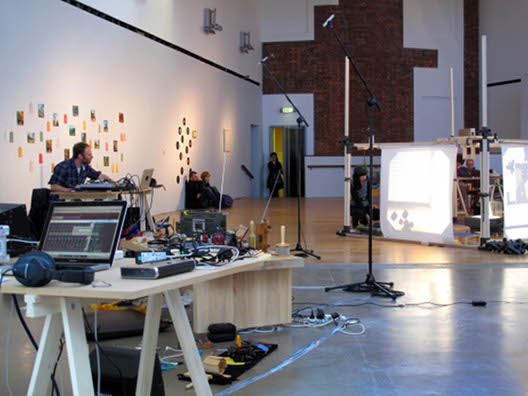 This is the seventh in the series of performances and features guest artist Lee Patterson who is a Prestwich (near Manchester, England) based sound artist and improvising musician. Alongside an array of invented sonic devices and processes, he uses recorded material in solo improvisation and installation, as well as working with a host of experimental and improvising musicians from around the globe.

During summer 2006, he produced the radio show, Audio Sketchbook, for Resonance FM, London and summer 2007 saw him work with and alongside Toshiya Tsunoda, producing outdoor sound installations for NVA’s Half Life, Scotland (www.arika.org.uk). Ongoing projects include an improvising trio with Rhodri Davies and David Toop, a duo with Graham Halliwell, a quartet with Angharad Davies, David Lacy and Paul Vogel as well as recent collaborations with Helena Gough, including a trio with Ben Drew.

For the month of April this evolving collaboration will takes its form in a month long residency where the artists will work in the galleries of the Crawford Art Gallery, both as a group and as individuals using improvisational ‘informal’ sound performance, experimentation with technology and combined media to explore creative possibilities resulting in an experience that offers multiple points of entry for the audience. The residency is a platform for the exploration of ideas and process with open-ended outcomes thus creating sound and visual possibilities using sound installation, still and moving images, video documentation and performance. Throughout the month scheduled and impromptu performances will occur with the artists inhabiting and changing the spaces around them.