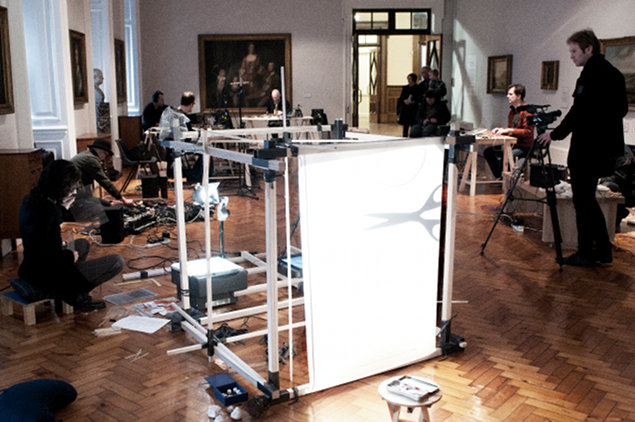 Strange Attractor [6]: is the sixth in the series of performances features guest artist Steve Roden who is a visual and sound artist from Los Angeles. His work includes painting, drawing, sculpture, film/video, sound installation, and performance. Roden’s working process uses various forms of specific notation (words, musical scores, maps, etc.) and translates them through self invented systems into scores; which then influence the process of painting, drawing, sculpture, and sound composition. These scores, rigid in terms of their parameters and rules, are also full of holes for intuitive decisions and left turns. The inspirational source material becomes a kind of formal skeleton that the abstract finished works are built upon.

Roden has performed his soundworks at various arts spaces and experimental music festivals worldwide including the Serpentine gallery, London, the San Francisco Museum Of Modern Art, The Walker Art Center, Minneapolis, The DCA, Dundee, Scotland, Redcat Theater, Los Angeles, as well as performance tours of Brazil and Japan. He has released over 20 CD’s of audio works on labels worldwide.

For the month of April this evolving collaboration will takes its form in a month long residency where the artists will work in the galleries of the Crawford Art Gallery, both as a group and as individuals using improvisational ‘informal’ sound performance, experimentation with technology and combined media to explore creative possibilities resulting in an experience that offers multiple points of entry for the audience. The residency is a platform for the exploration of ideas and process with open-ended outcomes thus creating sound and visual possibilities using sound installation, still and moving images, video documentation and performance. Throughout the month scheduled and impromptu performances will occur with the artists inhabiting and changing the spaces around them.