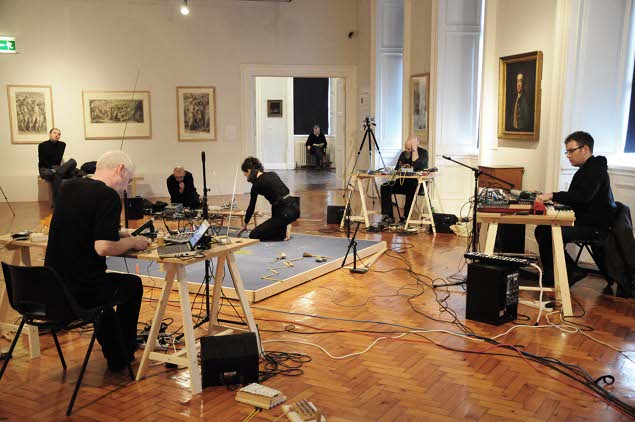 After some very well received collaborative performances with David Toop, Mary Nunan, Stephen Vitiello and Rhodri Davies the Crawford Gallery are pleased to present the fifth performance of this ongoing series –  Strange Attractor 5 with Alessandro Bosetti

This performance features guest artist Alessanrdo Bosetti, an Italian composer and sound artist working on the musicality of spoken words and unusual aspects of spoken communication, producing text-sound compositions featured in live performances. In his work he moves across the line between sound anthropology and composition, often including translation and misunderstanding in the creative process.

During 2010 his video installation ‘Two Madrigals featured in the collective exhibition Condotti Cronoarmonici at Galerie Mazzoli and was artist in residence at the Ertza Festival, Bera. Bosetti is joined by Kenta Nagi and Tony Buck for trance band Trophies. His many CD releases include ‘Royals’ on Monotype, ‘Expose’ on Die Schachtel and ‘Zona’ on Grob 652.

Strange Attractor, which began in November 2010, continues its monthly series of durational sound performances with invited guests, leading to a gallery based exhibition in April 2011. Throughout these ventures the artists will be working both collaboratively and individually using improvisational sound performance, experimentation with technology, combined media and random and improvised drawing and structural forms to explore creative possibilities resulting in an experience that offers multiple points of entry for the audience.

The live performances with invited guests open new cross-disciplinary relationships between sound, visual art, music and choreography and has featured internationally renowned artists David Toop and Mary Nunan in December 2010, Stephen Vitiello on 15 January and Rhodri Davies on 5 February. Upcoming performances include Alessandro Bosetti on5 March, Steve Roden on 2 April, Lee Patterson on 14 April and ‘System Deconstructed’ on 29 April. Performances take place from 12 – 4pm unless noted otherwise. Entry to all events is free with the audience invited to move around the space during the performance.

During the month of April there will be a Strange Attractor gallery based residency by Kelly, McCarthy, Murphy, O’Shea and Stalling in the Crawford Gallery. This residency will further develop the sound and visual possibilities already explored in the performances using sound installation,video,drawing, live events, discussion, and a continuously readapted network of scafform structures that will grow in form during the residency. Following on from this there will be a short sequence of live performances (dates to be confirmed) during the summer leading to a publication in September. This publication will feature texts by David Toop, Mary Nunan, Paul Hegarty amongst others and a DVD containing recordings from the live performances.