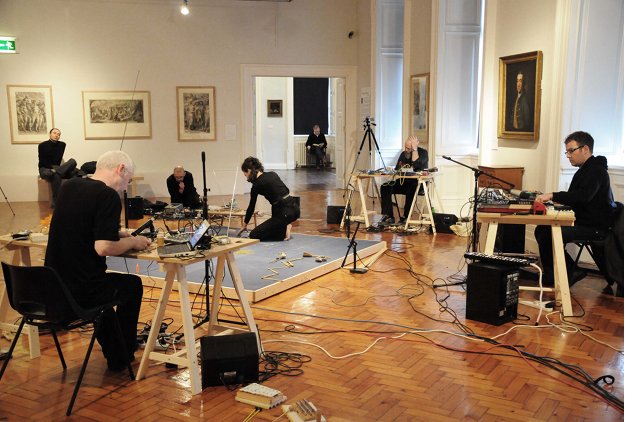 Strange Attractor 3, the third in the series of 4-hour sound performances, takes place on 15 January at 12pm in the Crawford Gallery. This performance features guest artist Stephen Vitiello, an electronic musician and sound artist who transforms incidental atmospheric noises into mesmerizing soundscapes that alter our perception of the surrounding environment. He has composed music for independent films, experimental video projects and art installations, collaborating with such artists as Nam June Paik, Tony Oursler, Pauline Oliveros and Dara Birnbaum. In 1999 he was awarded a studio for six months on the 91st floor of the World Trade Center, Tower One, where he recorded the cracking noises of the building swaying under the stress of the winds after Hurricane Floyd. As an installation artist, he is particularly interested in the physical aspect of sound and its potential to define the form and atmosphere of a spatial environment. A new solo exhibition of his work opens at Museum 52 in NY on January 12. He also has a number of collaborative CD projects due for release during 2011, including a live recording with Steve Roden, Olivia Block and Molly Berg on 12k and a CD with Lawrence English on the Crónica label.

Strange Attractor, which began in November 2010, continues its monthly series durational sound performances with invited guests, leading to a gallery based exhibition and publication in April 2011. Throughout this project the artists will be working both as a group and as individuals using improvisational sound performance, experimentation with technology and combined media to explore creative possibilities resulting in an experience that offers multiple points of entry for the audience.

The live performances with invited guests open new cross-disciplinary relationships between sound, visual art, music and choreography, has featured internationally renowned artists David Toop and Mary Nunan in December 2010. Future guests include Stephen Vitiello (15 January), Rhodri Davies (5 February), Alessandro Bosetti (5 March), and Steve Roden (2 April). Performances take place from 12 – 4pm and entry to all events is free with the audience invited to move around the space during the performance.

Strange Attractor culminates with an exhibition and publication by Kelly, McCarthy, Murphy, O’Shea and Stalling in the Crawford Gallery (1 – 30 April 2011) and will further develop the sound and visual possibilities already explored in the performances by using sound installation, still and moving image, video documentation, and further live events in the various spaces of Crawford Art Gallery.