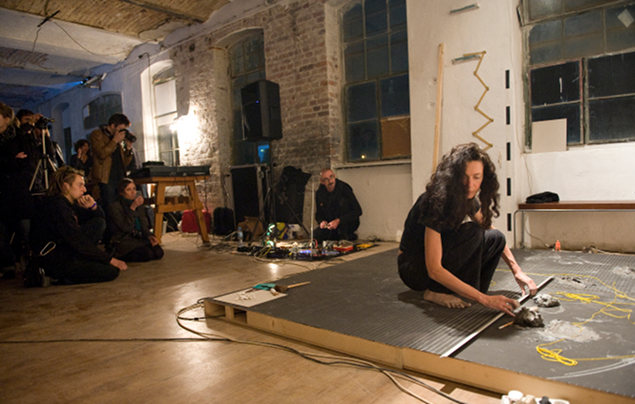 The project begins Saturday 20 November with monthly durational sound performances with invited guests, leading to a gallery based exhibition and publication in April 2011. Throughout this project the artists will be working both as a group and as individuals using improvisational sound performance, experimentation with technology and combined media to explore creative possibilities resulting in an experience that offers multiple points of entry for the audience.

The live performances with invited guests opens new cross-disciplinary relationships between sound, visual art, music and choreography, and feature internationally renowned artists David Toop and Mary Nunan (4 December), Stephen Vitiello (15 January), Rhodri Davies (5 February), Alessandro Bosetti (5 March), and Steve Roden (2 April). Performances take place from 12 – 4pm and entry to all events is free with the audience are invited to move around the space during the performance. The launch of Soundcast 4×4+1, a new limited edition audio CD published by Crawford Gallery & Farpoint with a specially designed foldout, containing images by Irene Murphy and texts by Francis Halsall and Peter Murray.

Strange Attractor 1: SYSTEM is the first in this series of 4-hour sound performances which begins on 20th November at 12pm in the Sculpture Gallery. This performance experiments with sound generated from movement and drawing on an amplified floor which creates a feedback loop between action and amplified reaction. Each performer will improvise with the sound source and effect each other’s creative actions.

Strange Attractor culminates with an exhibition and publication by Kelly, McCarthy, Murphy, O’Shea and Stalling in the Crawford Gallery (April 1 – 30) and will further develop the sound and visual possibilities already explored in the performances by using sound installation, still and moving image, video documentation, and further live events in the various spaces of Crawford Art Gallery.

DANNY McCARTHY is one of Ireland’s pioneers of performance art and sound art in Ireland and he continues to be a leading exponent exhibiting and performing both in Ireland and abroad. In 2006, he founded the Quiet Club with Mick O’Shea the Quite Club a floating membership sound (art and electronics) performance group. He is a founding director of Triskel Arts Centre and the National Sculpture Factory.

IRENE MURPHY’s work questions the role of the artist, creative space, and engages with a broader concept of creativity. A common link in her art are ideas about performativeness, site specificity and communality with Murphy’s art acts being private interventions into public space. She is active in initiating and participating in many group and collaborative projects and events, such as The YOYO Club, Ideal State Agency, Electric Rain, Us Live and Club House. creative trio The Domestic Godless that use food and hosting as their chosen medium. Murphy is a founder member of the Cork Artists Collective and The Guesthouse.

MICK O’SHEA works spring from his essential experience in drawing. His medium includes sculpture, drawing, sound and cooking. In 2003 O’Shea and fellow artist Stephen Brandes and Irene Murphy set up the collaborative practice, The Domestic Godless which, through performative cooking events, explores culinary activity as art practice and tests assumptions about the cultural traditions of food in challenging and often irreverent and absurdist ways. In 2006 he formed The Quiet Club with Danny McCarthy to promote and showcase improvised music and soundworks. O’Shea is a member and director of the Cork Artists Collective.

ANTHONY KELLY & DAVID STALLING have been collaborating on a series of sound and visual works since 2003. Their work encompasses a shared practice of recycling ‘objets trouveés’ of sound, visual and text material in their ongoing collaborative sessions. The juxtaposition of contrasting material results in a series of audio/visual ‘musique concrète’ pieces. Kelly & Stalling founded the sound art label Farpoint Recordings in 2005, publishing not only their own work but projects with artists such as Danny McCarthy, Alan Lambert, Linda O’Keeffe and Damo Suzuki