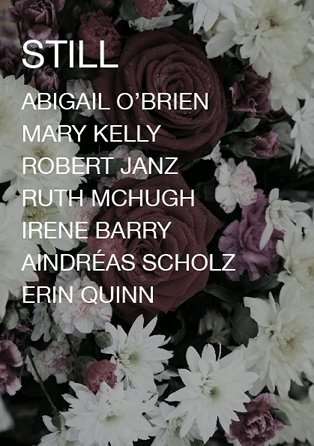 The Peppercanister gallery is very pleased to be presenting the imaginatively conceived group exhibition Still during the internationally selected exhibition Contemporary Dublin 2011 in September. Featuring cutting edge recent lens-based work by seven of Ireland’s most innovative contemporary artists. All of the artists use a camera as part of their creative process but the extraordinary results achieved are fitting tributes to their ingenuity, vision and technological expertise. The exhibited works are in small editions and competively priced, bearing in mind the international reputations of some of the senior artists included, and the formidable promise of the younger artists joining the ranks.

The Irish Times art critic Aidan Dunne has written a perceptive essay for the catalogue which contains illustrated colour reproductions and appropriate texts by the artists included. The Director of the Royal Hibernian Academy Patrick T. Murphy will formally open the exhibition at the Private View of Thursday 8th September. All are welcome.

The camera is magically capable of snatching a still image from the flux of a world in constant and varied motion. Yet, as more than one commentator has noted, by its nature the still image becomes a memorial to something that was. Instantly retrospective, it evokes an absence. This is particularly apparent when photographs officially become historical documents, referring to lives, and to whole worlds of experience, that are no longer. The seven artists in this exhibition explore the varied connotations of this aspect of the photographic image in distinctively different ways.

Robert Janz’s Waterglyph are records of marvelously evanescent drawings made with water in natural and urban settings. The photographs are the only traces that remain of fleeting, beautifully fluent drawings of animal forms, as dreamily transient as a memory of a shy beast glimpsed in the corner of your eye at a waterhole before it disappears in a blink. In an urban context, the momentary interruptions contrast with the bombast of graffiti, its assertiveness and notions of permanence.

Mary Kelly’s I believe help my unbelief addresses mortality and commemoration, stemming from many visits to the Angels Plot at Glasnevin Cemetery in Dublin. The Angels Plot is the section of Glasnevin where tens of thousands of stillborn babies are buried. Kelly’s photographs not only document sites of commemoration but also explore the very idea of a commemorative language, a structured means of recalling, each image a poignant recollection of individual experience and private, inconsolable loss.

Erin Quinn’s Surveillance series draws on the inherently suspicious nature of ubiquitous CCTV images, many real examples of which have become iconic for all the wrong reasons. Each of Quinn’s photographs made in public spaces and carefully framed from the high viewpoint typical of CCTV, invite us to deduce a narrative from the fragmentary, ambiguous but highly suggestive information imparted. We have unconsciously learned how to read such images, to look for ominous and problematic signs.

Where another body of work by Quinn, Breaking Point, can be seen on one level as a contemporary interpretation of John Everett Millais’s Pre-Raphaelite masterpiece, Ophelia, Irene Barry takes the subject on directly in her Ophelia series. Her phantasmagoric images plunge us into an underwater world of fabulous, billowing fabrics, visions of the tragic heroine’s dream of an afterlife. The distortions generated by light on moving water suggest, for Barry, an otherworldly realm with a different sense of time.

It is though the massed ranks of skyscrapers in Abigail O’Brien’s view of New York are under water, as they are reduced to undulating waves of light, a shimmering mirage. They become as protean and malleable as the blankets of salt crystalising out of the waters of her Salt Lake photographs, a series of works that visualize the landscape as a field of primal process, reducing the familiar, solid world of great cities to an Ozymandian recollection.

In a not dissimilar vein, Ruth McHugh’s photographs in Looking Back rush onwards but are haunted by that glimpse in the rear view mirror of a ruined, crumbling past. Again and again in her work, the past shadows the present, undermining its confidence, its certainty. Her images abound with metaphors for the relentless passing of time.

German-Born Aindréas Scholz’s Make Believe series is characteristic of his conceptual approach to photography, which is to defamiliarise it, to undo what film historian Eric Rhode once termed the viewer’s “habitual sense of superiority.” Scholz disturbs our sense of scale and reality, undermining our assumption that a photograph is a record of reality. He contrives to make what was real appear miniature and toy-like, and toys seem life-size and real, as though we are looking back on a storybook from childhood.