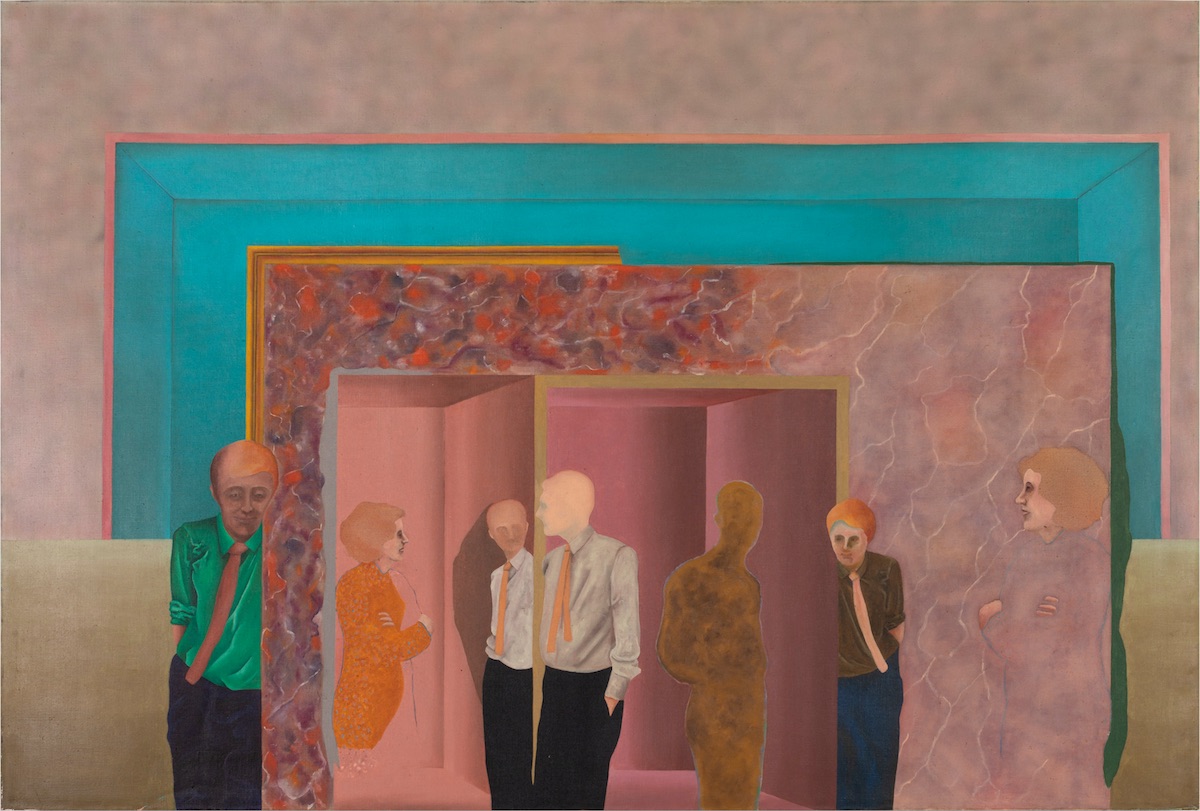 Kerlin Gallery is delighted to present an exhibition of rarely-seen early works by Stephen McKenna. Painted in the 1960s, when the artist was in his 20s and living in London, the works in this exhibition result from a decade of remarkable creative freedom.

Assembling fragments of shape and colour, McKenna’s early abstract paintings adopt a vivid multi-chromatic palette and a dreamlike elasticity. As the decade progresses, the artist begins to introduce the human figure to these scenarios, using spatial illusion to bend linear time and elicit intense psychological drama. Moving from abstraction to figuration with ease, he layers windows within windows, rooms within rooms; suspending the figure in abstract geometric prisms, or splicing it into composite parts. Seldom seen since they were first exhibited, the paintings in the sixties have a vitality and sense of discovery that reverberates across half a century – and are as captivating now as they were upon completion.

At the onset of the sixties, McKenna was a student at the Slade School of Art, an environment that championed modernism and abstraction. In 1971, he would leave London for a decades-long exploration of continental Europe (Germany, Italy, and Belgium) where he would refine a distinct artistic vision fusing classicism with modernity. The paintings in the sixties reflect the ideas of the 1960s avant-garde, with its tendency towards free association, absorbing the legacy of Surrealism and the influence of European pop culture. This formative period of McKenna’s career is defined by a quest for expanded consciousness and his belief in the power of the imagination.

Stephen McKenna was born in London in 1939, and was living and working in County Carlow, Ireland at the time of his death in 2017. Major solo exhibitions include Stadtische Kunsthalle, Dusseldorf; Hans und Sophie Teuber Arp Foundation, Bonn; the Van Abbemuseum, Eindhoven; the ICA, London; Modern Art Oxford; Fruitmarket Gallery, Edinburgh; The Hugh Lane, the Douglas Hyde Gallery, the RHA and the Irish Museum of Modern Art, Dublin. McKenna was shortlisted for the Turner Prize in 1986, and participated in historic exhibitions including Documenta 7, Kassel; Classical Spirit, San Francisco Museum of Modern Art; Falls the Shadow, Hayward Gallery, London; Avant Garde of the 80s, Los Angeles County Museum of Modern Art and Dreams & Traditions, at the Smithsonian Institute, Washington DC.

Reflections on Stephen McKenna’s life and art, with Patrick Murphy (director of the RHA), and artists Merlin James and Isabel Nolan.