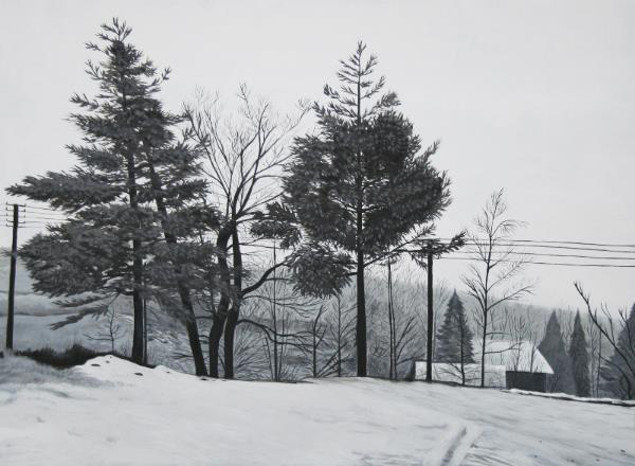 Stephen Loughman’s latest exhibition takes it’s title from Woody Allen’s 1978 film, “Interiors” which is considered to be heavily influenced by the work of Ingmar Bergman. Bergman’s films such as “Winter Light”, “Cries and Whispers”, “Fanny and Alexander” and “Scenes from a Marriage”, are the source for the paintings in Loughman’s latest series Interiors. The paintings depict a single frame of film and reference sub narratives of suicide, illness, clerical abuse and marital breakdown. By referencing these narratives and painting a single frame of film, Loughman creates a new context for these images. Each painting is titled using original Swedish dialogue from the respective film and brings to mind another famous Swedish export.

‘Stephen Loughman visually reinforces that strangely separate quality in which we experience our lives as part of some other narrative. We come to life in these landscapes which have been taken from realities elsewhere, versions of ourselves that have pre-existed us in imaginary form, in another medium, a cross-reference, fictionalised somewhere in the past by culture and commerce.’

Text by Hugo Hamilton, taken from Nothing is Real, Stephen Loughman & Mark O’Kelly (2008)