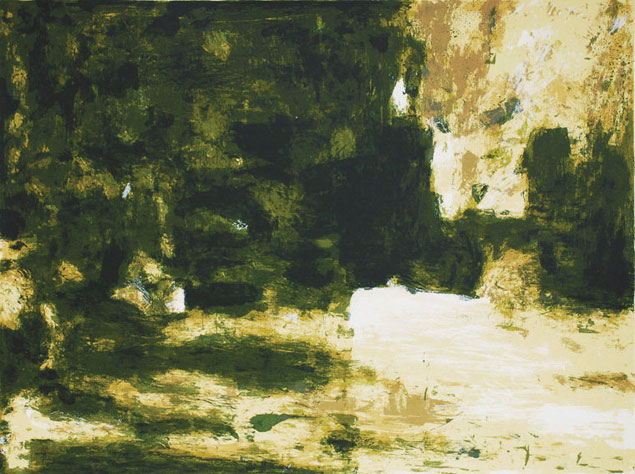 “In these essential prints Stephen Lawlor has rendered, or translated, a place into exquisite art.” Peter Fallon, January 2009

Solmyra is Lawlor’s long awaited solo exhibition at Graphic Studio Gallery since 2005. One of Ireland’s leading printmakers, Lawlor exhibits etchings, lithographs, silk screens and monoprints, all of which portray his distinctive, emotionally charged style by his use of colour, subject matter and dramatic contrast of light and dark.

An artist’s residency at Galleri Astley Arts Centre in Sweden earlier this year resulted in a suite of screenprints, which reflect the dense forest that covers the region. These works capture the quintessential nature of his subject matter and contains an atmospheric or an ‘airiness’ quality creating space and perspective by use colour and light.

Although the etchings contain the mood of old master paintings, Lawlor reduces the figurative elements, producing a more fluid and abstract image, which emphasise the intricate combinations of tone and color in these four plate complex images. Shapes form, dissolve and re-assemble themselves within these apocryphal works that we recognise in an art historical sense but have been re-assembled to haunt our memory.

Born in Dublin, Stephen Lawlor graduated from the National College of Art & Design in 1983. Lawlor is also a well established painter and he has exhibited widely in Europe, USA and the Far East. His work is represented in many international public and private collections.

Dnote 178
Through the Arch off Cope Street (behind the Central Bank)
Associated sites
Design: iCulture • Privacy and cookies