Stephen Dunne: Uchronia. Not as It Was But as It Might Have Been 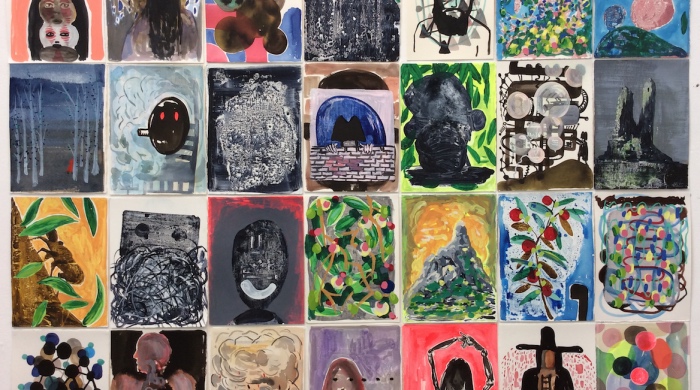 Uchronia refers to a hypothetical or fictional time-period of our world, in contrast to altogether fictional lands or worlds. A concept similar to alternate history but different in the manner that uchronic times are not easily defined, sometimes reminiscent of a constructed world. The concept of Merry England is an example of uchronic myth. It refers to a poorly defined point after medieval England, mainly existing as a collective memory and nostalgia of a better past, although historically such a period never existed.

The word is a neologism from the word utopia (Greek u-topos, meaning “no-place”), replacing topos with chronos (time). It was coined by Charles Renouvier as the title of his 1876 novel, Uchronia, an Apocryphal Sketch of the Development of European Civilization Not as It Was But as It Might Have Been, from which, Stephen Dunne has titled this new body of work.

Dunne’s practice operates across the registers of painting, drawing, moving image and the investigation of speculative and theoretical fictions. Currently, his work stems from a playful approach at image making, beginning with inkblots and random chaotic marks made on paper which are subsequently manipulated into suggestions of various forms. Works are produced in a spontaneous manner and attempt to draw upon the unconscious as a source material.

Constellations of drawings are placed on the wall in response to both the space itself and to each other. The process of making, where each thing leads to the next through an experimental and intuitive approach is at the core of Dunne’s work. The subsequent work acts as a trigger for fragments of shared memory brought to the surface via a type of riffing on imagery, both familiar and drawn from narratives prevalent in popular culture.

Based in Dublin, Dunne graduated with an MA in Fine Art painting at the Royal College of Art. Recent exhibitions include As Above, So Below: Portals, Visions, Spirits & Mystics & Wilder Beings Command both at the Irish Museum of Modern Art.

Solo shows: Luminous at NAG; Poached Eyes on Ghost & Corpse of Milk, Fumbally Exchange; Subliminal Anarchy, Pallas Projects and a series of exhibitions at Rise in Berlin The Phantom Limb; Schizo Epiphanies and Der Zauberlehrling (The Sorcerer’s Apprentice). Toot Tootsie Goodbye at V1 Copenhagen, group shows at Domobaal London, GSK Contemporary at the Royal Academy in London and The Big Four at Channel Four. Stephen was also included in Pilot 3 which was exhibited as part of the Venice Biennale in 2007.

Forthcoming solo presentations include, Triskel Arts in Cork, April 2019 and The Courthouse Gallery in Ennistymon, May 2019.