Sonia Shiel: Here, while the bees are sleeping 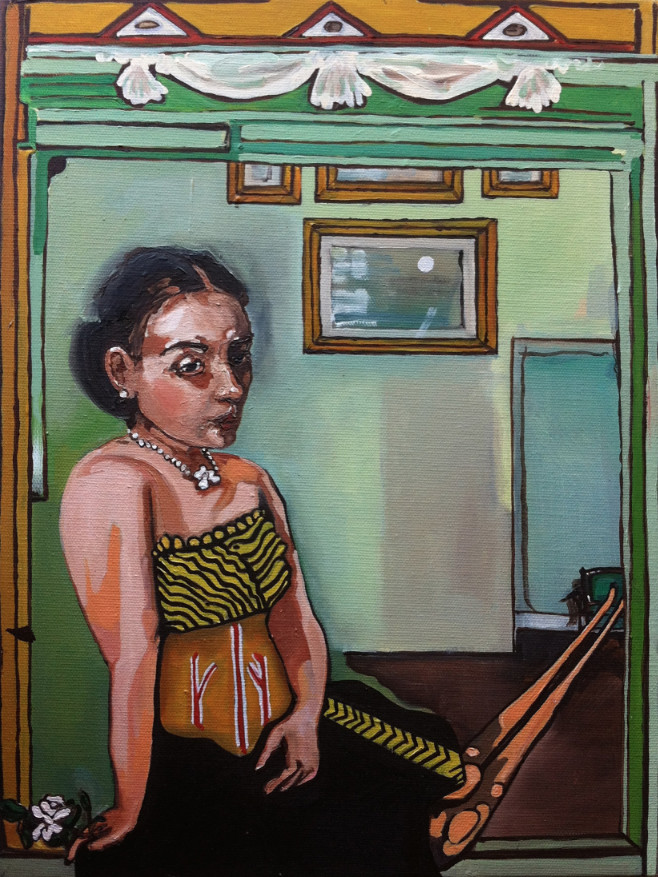 It would scarcely be paradoxical to say that a flash of lightning itself, travelling forever upon the circumference of this unutterable circle, would still, forever, be travelling in a straight line. That the path of our Sun in such an orbit would, to any human perception, deviate in the slightest degree from a straight line, even in a million of years, is a proposition not to be entertained:—yet we are required to believe that a curvature has become apparent during the brief period of our astronomical history—during a mere point—during the utter nothingness of two or three thousand years.

From Eureka: An Essay on the Material and Spiritual Universe by Edgar A. Poe, 1848, alternately sub-titled a prose poem.

The deep shadows and foreboding skies of Sonia Shiel’s nocturnal paintings for Here, while the bees are sleeping, convey surreal encounters with natural phenomena in a hyper-luminous world. Besieged by a suite of classic horror tropes, her domestic forms take on metaphysical dimensions as honey drips and stars flare; amorphous bodies twist; and unlikely portals dissolve worry into wonder and landscape into room.

Born in Dublin, Sonia Shiel received the 2014 Arts Council’s Project Award, with which she completed the Art & Law Fellowship Program at Fordham Law School while participating on the International Studio & Curatorial Program (ISCP) in New York. This was followed by a residency at the Irish Museum of Modern Art, where the development of much of this work has been kindly supported. Forthcoming solo shows in 2015 include FLOOD, Dublin and SLAG, New York. Recent exhibitions include The Crawford Gallery, Cork; The Irish Museum of Modern Art, Dublin; The Lewis Glucksman Gallery, Cork; Rua Red, Dublin, ISCP, New York; The Oonagh Young Gallery, Dublin; The Model, Sligo; Temple Bar Gallery and Studios; Kulturbunker Kulturamt, Frankfurt; Centre Culturel Irlandais, Paris; The Butler Gallery, Kilkenny; FOUR, Dublin and The RHA Gallery I and II, Dublin, aswell as group shows at The Glue Factory, Glasgow; The Douglas Hyde Gallery, Dublin; Atelier Frankfurt and TBG+S, Dublin, among others. Shiel has been the recipient of many competitive awards including the Hennessy Craig Award; The Tony O’Malley Award; HIAP; Centre Culturel Irlandais, the TBG+S Frankfurt exchange program and Banff Centre for the Arts, Leighton Residency Award, Canada. Her works are in public and private collections including the Arts Council of Ireland and the Office of Public Works.

Here, while the bees are sleeping will be accompanied by a short text by Mary Cremin, Independent Curator.