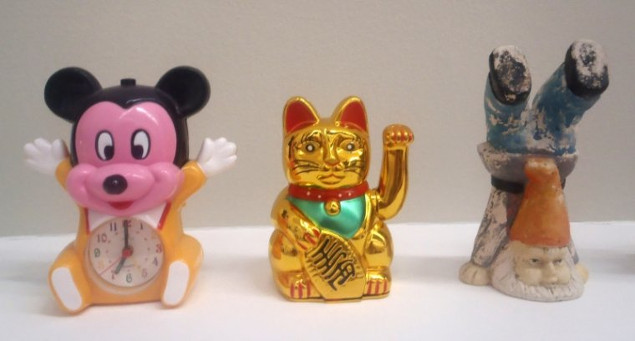 Jim Ricks’s installation for the Sleepwalkers series, Bubblewrap Game: Hugh Lane, presents a diverse collection of objects – including paintings from the Hugh Lane’s collection, borrowed works and flea-market kitsch – all displayed on an equal level. There is no judgment made on the respective cultural, aesthetic, historical or market worth of each object, yet each is linked to the next on a single shelf in a circumnavigation of the curved walls in Gallery 8 at The Hugh Lane. Here Ricks reflects his ongoing interest in ideas about the symbolic and monetary value of property.This combination of diverse objects set side by side to create new meanings can be seen as a form of collage. The artist has called this method ‘Synchromaterialism’. The trail of objects can be followed in either direction around the curved room with no fixed starting point. This creates a loop that Ricks, citing Karl Marx, sees as historical narrative repeating “first as tragedy and then as farce”. Viewers are invited to create their own narratives and connections between the objects on display.

Jim Ricks is interested in pushing acceptable notions of a hybrid art/curatorial practice while dissolving normally accepted hierarchies. Working in a collage format, the artist utilises appropriation (the use of pre-existing objects or images which challenges ownership and authorship) and sees curation as a logical extension of that. For Bubblewrap Game Ricks has included work from The Hugh Lane collections by artists such as Gerard Dillon and James Barry, as well as works on loan from artists including Raphael Zarka and James Hanley. The artist’s use of appropriation – taking existing objects or artworks to make new work – can also be interpreted as piracy, repurposing or misuse.

Jim Ricks studied at the National University of Ireland, Galway/Burren College of Art and the California College of the Arts. Originally from California, he has lived in Ireland for 8 years. Ricks was selected for Futures 12 at the Royal Hibernian Academy in 2012. In the last two years Ricks has created and toured the popular public work the Poulnabrone Bouncy Dolmen. Alongside his own exhibitions he has curated shows in Dublin, London, Galway and San Francisco. As a member of Cause Collective he recently toured to Afghanistan with the collaborative project, In Search of the Truth (The Truth Booth). See www.jimricks.info