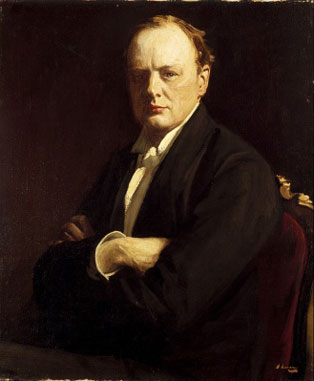 We are now approaching the centenary of the 1916 Rising and it is time to revisit and appraise the significant visual documentation and historical records from a contemporary perspective. This is the first of a series of exhibitions which examines the role that some of our most renowned artists played in shaping that history.

Sir John Lavery was one of the most famous celebrity portrait painters at the turn of the 20th century. He and his beautiful wife Hazel, who was originally from Chicago, were the original celebrity couple in London society where John enjoyed huge patronage from the British establishment. They counted Churchill among their friends and Hazel, herself an artist, taught him to paint. Orphaned at a young age in Belfast, Lavery grew up in Scotland where he struggled to make his career as an artist. His talent was recognised early on and following on a successful commission to paint Queen Victoria’s state visit to Glasgow in 1888 Lavery settled in London where he rose to prominence. He maintained his interest in Irish affairs and became increasingly involved after the 1916 Rising, painting both the people and the events that culminated in the birth of Modern Ireland. Lavery donated a substantial number of works to the Gallery when his wife Hazel died in 1935. At the same time, he donated a large collection of work to the then Belfast Gallery and Museum, now the Ulster Museum. These two donations to the North and South ‘Island of Ireland’ provide a unique insight that turbulent period of our history. It is one of the most singular and significant historical records of the period and is at the heart of this exhibition Sir John Lavery: Passion and Politics.

The exhibition includes visual representations, through film and archive materials never before shown in public exhibition, that provide insights into the social and political context in which Lavery was painting. Passion and Politics documents the lives of Sir John and Hazel Lavery and their involvement in a newly shaped Ireland, a partitioned Ireland, which had only just been formalised at the time of his gift.

John Lavery’s passion for his wife is steadfast throughout his career. She was his muse. As her fame and reputation grew, Hazel became an inspiration for others. As a media conscious couple, they saw the advantage of press attention and used it to the full. They contrived a celebrity cult status unprecedented in society of that time and Lavery’s portraits of pre and post war England are redolent of the life of the privileged classes. His Irish ouvre, however, grew on all events, religious, political and social as subjects for his work

Central to this exhibition is the large triptych work entitled Madonna of the Lakes which Lavery donated to St Patrick’s Roman Catholic church, Donegall Street, the Belfast church in which he had been baptised. The work is based on a tableau vivant that depicts Hazel as the Madonna and consolidates her iconic status.

Commissioned by the Irish Free State Government to design the new bank notes, Lavery used Hazel as his model for Kathleen ni Houlihan. The original painting for this image is on view in this exhibition.

Another highlight of the exhibition is High Treason, Court of Criminal Appeal: the Trial of Roger Casement, a large painting of one of the great miscarriages of justice from that period. Lavery paints the courtroom scene where Sir Roger Casement made his appeal against his sentencing for treason for attempting to bring arms from Germany to Ireland in support of the 1916 Rising. This work was an extremely brave undertaking for an artist whose livelihood was derived primarily from patronage by the British establishment.

The exhibition is accompanied by a catalogue with new research and essay by Sinéad McCoole, author of Hazel: A Life of Lady Lavery.