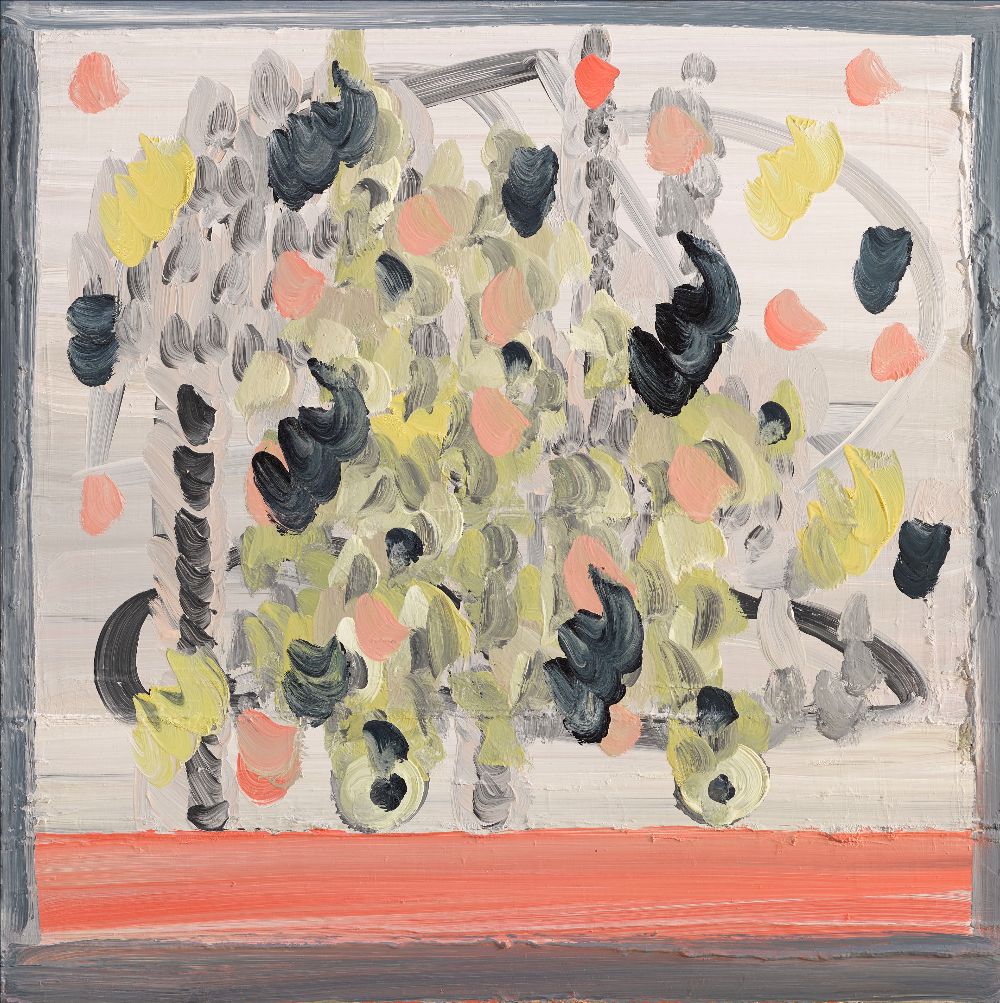 Kevin Kavanagh is proud to present Teorainn, a new exhibition of paintings by Sinéad Ní Mhaonaigh.

Ní Mhaonaigh’s paintings contain questions regarding the boundaries and limits of line, texture, colour and the substance of paint itself. This new series continues this inquiry, using a unique and constantly evolving colour palette. Contrasting thick, weighty layers of paint with seemingly light and carefree brush strokes, Ní Mhaonaigh creates a certain sense of balance that is particular to the internal logic of her paintings.

Each painting contains a framing device, allowing them almost total autonomy, both beginning and ending within themselves. While these painted frames imbue the work with a sense of solidity and structure, they also serve to disorientate and perplex. They allow the paintings to appear both bottomless and filled with light and air.

With skilful curiosity and a combination of laborious and whimsical mark-making, Ní Mhaonaigh makes patterns and shapes that are at once repetitious and entirely novel. In this new series of paintings, the paradoxical and ambiguous nature of paint is celebrated and pushed forward into new territory.

Sinéad Ní Mhaonaigh (b 1977) graduated with a BA in Fine Art Painting from Dublin Institute of Technology in 2001. Ní Mhaonaigh was recently elected a member of the RHA. She was awarded The Hotrom ARTWORKS Award for outstanding work Visual Carlow and received an arts bursary from Wicklow County Council in 2019. In 2018 she was shortlisted for the John Moores Painting Prize. Recent solo exhibitions include Achar (2018), Ardán (2016), Kevin Kavanagh, Dublin, Dúil (2016), Limerick City Gallery of Art, Imlíne (2014), Triskel Gallery, Cork, Contours (2014), Kevin Kavanagh, Dublin, Paintings (2012), Linehall Arts Centre, Mayo and Eatramh (2011), Kevin Kavanagh, Dublin. Ní Mhaonaigh has also taken part in many group exhibitions including Hold to the Now (2015), SLAG Gallery, New York , Last (2012), the Douglas Hyde Gallery, Dublin, UNBUILDING (2010), Mermaid Arts Centre, Wicklow . She has also exhibited as part of VOLTANY New York in a solo presentation in 2016. Ní Mhaonaigh has been awarded the Hennessy Craig Scholarship, the Wicklow County Council Art Bursary in 2010 and was shortlisted for the Marmite Prize for Painting in 2016. Her work is held in many important public collections including the Office of Public Works, the Centre Culturel Irlandais, Paris, the Highlanes Art Gallery in Drogheda and The Arts Council as well as private collections in Ireland, across Europe and the USA.