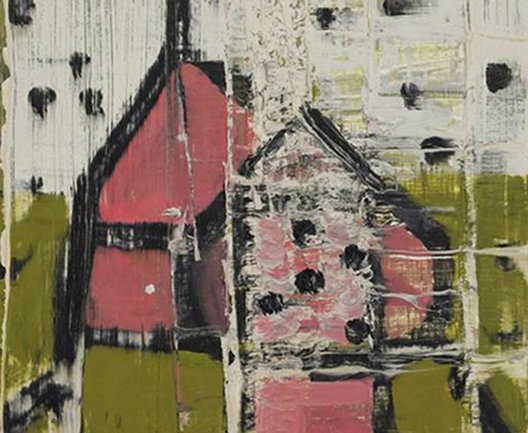 We navigate spatial plains not with sight alone but through a combination of our exteroceptive senses in order to position ourselves within the known world. In keeping with this logic, we must also apply the sense of such senses to our deconstruction of introspective and/or imagined space. Within Ní Mhaonaigh’s canvases, planes resonate in quiet motion coaxing an introverted state, creating atmosphere which is not didactic, but personable and honest. The works achieve not an exchange between viewer and canvas as is with most painting but ensue a sort of symbiotic amalgamation of viewer and spatial dimension. Ní Mhaonaigh creates aesthetic portrayal of infinite spatial dimension, non-exclusively physical, which we attempt to gain access to by means of deconstruction through language, in this case on and extending from the canvas plane.

A duality is formed in paired works. Opposing canvases turn thresholds of seaming vastness into enclosed sanctuary, completed by concave/vex equilibrium. This polarity creates a dichotomy to the way in which shifts in theatrics and notions of territory are handled, pushing against current boundaries in order to re-appropriate how we think on many. We separate their duality as they can only exist opposing one another like Nietzche’s Apollonian and Dionysian, in which order and disorder function symbiotically as separate entity’s to keep each other on track.

It has been previously suggested that Ní Mhaonaigh’s work, may be a private attempt at what Foucault called the de-sanctification of space, in which site and space cannot detach from the shroud of sanctity ever attached to what we regard as history. It is inherent in the nature of the non-linear composition to evoke the suggestion of time and with that, themes of our ever-accumulating past.

The works confidently display self-assurance, asserting through self-dissection, their own worth, place and ability free of distracting tangents. The physical application of painting acts to attain a similar affect as the resonating assimilated plains within. Thick application of paint removes the canvas surface/frame from being our first/last port of call, dissolving final boarders. On a very straight level these works demonstrate why abstract is not ever absurd but is just not a linear narrative. Forms compete for our attention lacking a finality, creating the theatrics which accompany the possibility for infinite potential.

“They are symbols longing for an epiphany…What remains striking is the emptiness of the reformative spaces and what is absent and alluded to outside of the canvas. The viewer is drawn to acknowledge gaps in the representational attempts of the painting and the arbitrariness and instability of meaning… they may be the visualisation of a ‘mind at work’ in its dislocated search of spiritual and ontological certainty”. Skatulski and Snow